In Honor of The Holy Archangels:

by Leticia Velasquez on Mar 20, 2012 in Contraception & Abortion, Featured, On Books, Parenting 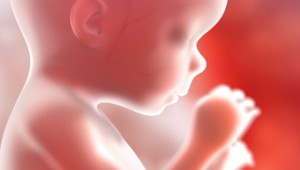 I was mourning my third miscarriage and seeking a book that would offer me comforting words from a Catholic mother who had also lost a child. I found Letters to Gabriel by Karen Garver Santorum. In the pages of this book I got to know Karen as she spoke to her son Gabriel, who is now with God. This is a story of fierce love for a child by his parents.

While still in utero, Gabriel had a life threatening urinary tract irregularity. His body was not producing urine and he would soon die. Karen, a neo-natal nurse, and Rick would not accept this. They traveled out of state to a doctor who was able to do inter-uterine surgery. Although the surgery was successful, Karen contracted an infection that caused premature labor. Despite their best efforts to save him, Gabriel was born prematurely and did not survive. He was waked at home and buried as any other member of the Santorum family would be.

But the story didn’t end with Gabriel’s death. Karen lost Gabriel in the middle of the Senate debates on the Partial Birth Abortion Ban. Rick, who had not sought the national spotlight, was suddenly thrust into it as he debated the well-known, pro-abortion senator, Barbara Boxer of California.

“Senator (Boxer) was thanking the women who had had partial birth abortions for coming forward with their stories… She said she “hears the cries of the women outside this Chamber.”

“We would be deafened by the cries of children who are not here to cry because of this procedure,” retorted Senator Santorum. The Washington Post described what happened next.

Republican Senator Rick Santorum turned to face the opposition, and in a high, pleading voice, cried out, “where do we draw the line? Some people have likened this procedure to an appendectomy. This is not an appendix!” he shouted, pointing to a drawing of a fetus. “It is a baby. It’s a baby.”

And then, impossibly, in an already hushed gallery, the cry of a baby pierced the room, echoing across the chamber from an outside hallway. Not one mentioned the cry, but for a few seconds no one spoke at all.”

Karen continues, “A coincidence? Perhaps. . .or maybe. . .it was the cry from the son whose voice we never heard, but whose life had forever changed ours.”

Rick concludes, “Sometimes you hear a faint voice inside whispering what you should do. With respect to this issue, I heard the message through a loudspeaker.

I interviewed Rick Santorum in 2007 for Canticle magazine, and he said he felt as thought it was Gabriel’s voice from heaven, supporting his father as he asserted the truth that the unborn baby is still a baby with a right to live. During the interview, I shared with Rick that Letters to Gabriel resonated with me because my daughter Christina has Down syndrome, and we chatted about the blessing of special needs children. Within a year, baby Isabella Maria Santorum was born with Trisomy 18, an event which Rick said inspired him to run for president, to help create a more welcoming culture for children with special needs.

Letters to Gabriel is a sensitive and comforting book because it reminds parents who have lost a child that their child matters to God, to their family, and to the world. It is a unique tribute to the value of every human life, and should be on every Catholic family’s bookshelf. I myself bought several copies to give away to friends who had also experienced the loss of a baby.

Hymn of Praise to St. Gabriel, the Archangel.

Hail Gabriel, hail; a thousand hails
For thine whose music still prevails
To charm the list'ning ear;
Angelic word, sent forth to tell
How He the Eternal Word should dwell
Amid His creatures here.

Heaven's voice of sweetness, uttered low,
Thy words like strains of music grow
Upon the stilly night;
Clear echoes from the mind of God,
That steal through Mary's blest abode
In pulses of delight.

O voice, dear voice, the ages hear
That hail of thine still ling'ring near,
An unexhausted song;
And still thou com'st with balmy wing,
And still thou sweetly seem'st to sing,
Thine Ave to prolong.

Take up in Heaven for us thy part,
And singing to the Sacred Heart
Thy strains of rapture raise;
And tune with endless Ave still
The voices of the Blest, and fill