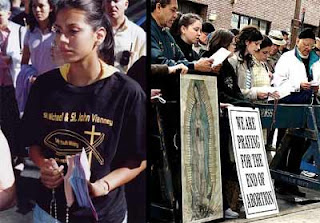 WASHINGTON, Jan. 12 /Christian Newswire/ -- "As America approaches the 36th anniversary of the Roe v. Wade U.S. Supreme Court ruling that imposed abortion on our nation, pro- life advocates are launching the next wave of a unique pro-life campaign, 40 Days for Life," said David Bereit, national director of 40 Days for Life.

"From February 25 until April 5, people will join together for 40 days of prayer and fasting for an end to abortion, 40 days of constant, peaceful vigil outside abortion facilities and Planned Parenthood offices and 40 days of intensive pro-life community outreach," he said. Cities interested in hosting campaigns are invited to apply online at www.40daysforlife.com/apply. "In addition to U.S. cities from coast to coast, we've also received inquiries from Canada and Australia." Applications will be accepted through Wednesday, January 14.

The campaign dates coincide with the Christian season of Lent. "Lent is a season of prayer, fasting and reparation," said Bereit, "and many Christians who observe Lent are being drawn to 40 Days for Life and its call to offer personal sacrifice in the effort to put an end to the evil of abortion."

There have been three coordinated national 40 Days for Life campaigns, beginning in the fall of 2007. "The efforts of people at the grassroots level have shown a profound impact," said Bereit. "More than 200 cities have participated thus far, reporting more than 175,000 people united in prayer and fasting. Three abortion facilities closed following 40 Days for Life campaigns, and more than a dozen abortion industry employees have left their jobs during these times of prayerful outreach. And most notably, we are aware of 1,128 innocent children who were spared from death by abortion during these campaigns."

"I don't know about that 'well-funded' part," said Bereit, "but we are playing for keeps in this effort to end abortion. Following the tremendous impact experienced during the first three national 40 Days for Life campaigns, I can't wait to see what life-saving results will be accomplished this spring."