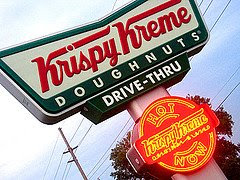 Washington, D.C. (18 January 2009) – In light of a nationwide marketing trend to capitalize on the inauguration of President-elect Barack Obama, American Life League challenged Krispy Kreme Doughnuts, Inc. Thursday on the propriety of using the phrase "freedom of choice" in their corporate announcement regarding a free doughnut giveaway on Jan. 20 - Inauguration Day. Subsequently on Friday, Krispy Kreme updated the announcement. The following is a statement from Judie Brown, President of American Life League:

"We are grateful to Krispy Kreme executives who realized the inappropriate use of the phrase "freedom of choice" and have changed their announcement, available on their web site.

"Barack Obama is one of the most radical pro-abortion politicians ever elected president. Even though Obama claims he is not pro-abortion, but rather "pro-choice," his record speaks for itself. Obama received millions of dollars from the "freedom-of-choice" abortion industry because he swore that as one of his first acts as president, he would sign the Freedom of Choice Act, a legislative proposal that would wipe out a litany of incrementalist pro-life legislation with one stroke of his pen.

"The use of the phrase "freedom of choice" by any corporation, particularly when used to coincide with President-elect Obama's inauguration, is offensive and demeaning to the millions who have suffered either directly or indirectly through abortion. Abortion is a tragedy for everyone involved in it. Thus we felt obligated to issue our original statement and subsequently communicate with Krispy Kreme Inc.

"American Life League thanks Krispy Kreme for correcting their public statement. Their corporate decision was not only wise but will result, we are certain, with an increased number of customers not only on January 20th but for years to come."

American Life League was cofounded in 1979 by Judie Brown. It is the largest grassroots Catholic pro-life organization in the United States and is committed to the protection of all innocent human beings from the moment of creation to natural death. For more information or press inquiries, please contact Katie Walker at 540.659.4942.