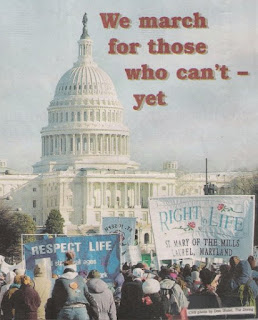 "More than 300,000 people assembled in Washington, D.C. [January 22] for the 36th Annual March for Life. But as far as The New York Times is concerned, it never happened," Feder observed. Feder was the keynote speaker at the event's Rose Dinner.

He continued, "If 50,000 feminists had gathered on the Mall in D.C., to demand passage of the so-called Freedom of Choice Act, it would have been above-the- page-one-fold coverage in The Times, accompanied by an aerial photo of the crowd."

Notwithstanding that the March for Life is the largest annual event of its kind in D.C., Feder noted, The Times didn't even run a few sentences on it in the National Briefing box, which summarizes U.S. news.

Feder questioned the paper's decision to disregard the pro-life protest in favor of "non-news" like "No Snickering: That Road Sign Means Something Else" (three-quarters of a page on A6, about signs with a double entendre in the U.K.), "Boise Region Grapples With Smog, a Growing Threat" (a half-page on A12) and "Heat and Drought Blamed for Tree Deaths in West" (A13)."

About Don Feder:
Don Feder is the editor of Boycott The New York Times. A former Boston Herald editorial writer and syndicated political columnist, Feder has appeared on "The O'Reilly Factor," "Hannity and Colmes," "Politically Incorrect," "The 700 Club," "Focus On The Family," "Fox & Friends" and "The Savage Nation." His columns have been read on the air by Rush Limbaugh and Dr. Laura.