WARNING: The MOTHERS Act - Trolling for Mental Patients in a Maternity Ward Near You 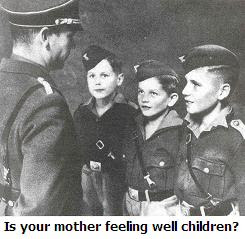 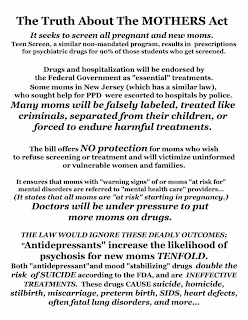 WASHINGTON, Jan. 28 /Christian Newswire/ -- Certain Congressmen who normally spend time pushing legislation are on a mission to "save" birthing mothers of America from "mental illness." The Melanie Blocker Stokes MOTHERS Act exploits a mother who was "treated" with almost everything the mental health industry can offer, from drug cocktails to electroshock. These "treatments" worked so well for Melanie that she jumped from a 12th story Chicago hotel room window.

The bill seeks to screen all pregnant and new mothers in America for being "at risk" of mental disorders, and funnel them into "preventive treatment." What the sponsors won't talk about are the thousands of babies dying each year from spontaneous abortions and birth defects caused by antidepressant exposure. Nor do they publicize a provision in the text to conduct research on post-abortive women.

The bill died last session, despite Harry Reid's attempt to pass it in a failed $10 billion omnibus spending bill. This session, we may not be as lucky. One cosponsor of the bill from the 110th Congress is now President. Another is Secretary of State. And Majority Leader Harry Reid now enjoys a much larger majority in his voting caucus, which could help him overcome any potential filibuster in the Senate.

Implementing a nationwide "mental illness" scaremongering campaign seems logical to those who haven't yet learned to locate the FDA website for black box suicide warnings. Or to those who think that electrocution is wrong if used for capital punishment, but electrocuting the brain of a mental patient is ok.

But to people like me, or my friends Julie Edgington, Mathy Downing, Kim Witczak, Jim Torlakson, Kim Crespi and Enne Currie, this bill flies in the face of not only reason, but morality. For it ensures that more families will suffer the same horrors ours have. Things we can never forget. For myself, being suicidal and homicidal after only three days on Zoloft. For Julie, having a baby with a rare heart defect who nearly died at birth. For Mathy, Kim W. and Jim, losing a child or husband to antidepressant-induced suicide. For Kim C. -- twin daughters murdered by their father under the influence of Prozac. And for Enne, not knowing whether her son Dirul Lewis is alive or dead, even though his psychiatrist does.

This path paved in death and destruction is a road America must not travel.