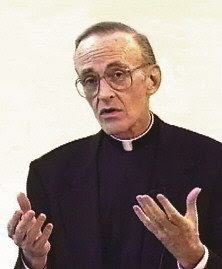 Monsignor William Smith, professor of moral theology at Saint Joseph's Seminary in Yonkers since 1971 and one of the leading Catholic voices in the U.S. on medical ethics, died yesterday at St. Joseph's Hospital in Yonkers.

Smith, 69, was a Yonkers native who grew up in St. Denis parish.

He was ordained a priest in 1966 and shortly thereafter was chosen by Cardinal Terence Cooke to pursue a doctorate in moral theology and return to teach at his hometown seminary.

A Mass of the Holy Eucharist will be celebrated at 7:30 p.m. Tuesday at the seminary. Bishop Gerald Walsh, rector of the seminary, will be the celebrant. The Rev. Donald Haggerty will be the homilist.

A Mass of Christian Burial will be celebrated at 10 a.m. Wednesday at Immaculate Heart of Mary Church, 8 Carman Road, in Scarsdale, where Smith had celebrated weekend Masses for many years. Cardinal Edward Egan will be the principal celebrant. Monsignor James O'Connor will be the homilist.