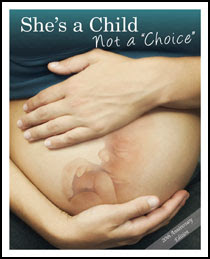 MINNEAPOLIS, Minn., April 14 /Christian Newswire/ -- Human Life Alliance (HLA) has released the 20th Anniversary edition of "She's a Child Not a 'Choice'"-- a tabloid designed to increase personhood awareness among pro-lifers and educate others on the dangers of abortion.

Differing from previous HLA publications, the new "She's a Child Not a 'Choice'" places a spotlight on the personhood of the preborn child.

"HLA believes acknowledging the personhood of all human beings involves recognizing the right to life, liberty and the pursuit of happiness for everyone," stated executive director Jo Tolck. "While many abortion supporters recognize the humanity the preborn child, they still refuse to acknowledge these children as persons, under the law, who should be afforded the same rights and privileges as children outside the womb."

"She's a Child Not a 'Choice'" covers topics such as stem cell research, in vitro fertilization and eugenic abortion. It also includes personal testimonies from post abortive individuals as well as a section highlighting support for families of preborn children with an in utero diagnosis of physical disabilities.

"We are thrilled that HLA has created this publication," said Keith Mason contributing author and co-founder of Personhood USA. "We intend to use it in our mission to establish personhood laws in 40 states."

Previous HLA material focused on educating young people, who support abortion or do not have a strong opinion on its danger to women's health. The new "She's a Child Not a 'Choice'" will help all people recognize the destructive realities of abortion and explore developing pro-life issues.

"One of the worst things you can do as a pro-lifer is to be uninformed on the issues," said Ms. Tolck. "Without being prepared to present solid answers to question on personhood and the humanity a preborn child, we greatly diminish the pro-life message."

HLA intends to distribute this new resource in churches and public venues across the county in cooperation with other pro-life organizations.

This newspaper is a special anniversary edition of the original "She's a Child Not a 'Choice,'" which was designed to educate people on the humanity of the preborn child and gruesome realities of abortion. Since releasing its first publication in 1990, HLA has reached 165 million people around the world with a pro-life message.

More information on Human Life Alliance is available at www.humanlife.org or by calling (651) 484-1040.