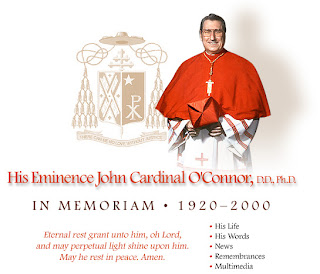 https://www.ewtn.com/Memoriam/oconnor/index.htm
Fr. Frank Pavone
National Director, Priests for Life
It has been ten years since the death of New York's archbishop, Cardinal John O'Connor. He died of a brain tumor on May 3, 2000, but had he not become ill, his sister Mary Ward has her own conviction of when and how he would have died.
"He would have died in the attack on the World Trade Center on September 11, 2001, along with Fr. Mychal Judge," Mary said to me. Fr. Judge was the first officially recorded victim of the September 11 terrorist attack, killed as he ministered to people in the lobby of the World Trade Center north tower after the initial attack. Cardinal O'Connor would have rushed to the scene as soon as he heard of the attack.
The Cardinal was an exemplary priest and bishop, teacher and leader. Catholics rightly take pride in how he gave witness to the Faith and to what the Church is all about. Priests and bishops drew strength for their ministry by following his example.
But his appeal, much like that of his friends Mother Teresa and Pope John Paul II, reaches far beyond the Catholic world. He was a witness to humanity, to its meaning and its dignity. His ecclesiastical motto was "There can be no love without justice," and he was committed to promoting both.
He eased racial tensions, helped resolve labor disputes, held starving children in Ethiopia, intervened in crises in Cuba and Central America, and much more. Yet his motivations were not secular; they were rooted in Christ. That accounts for what the world sees as the paradox of a man whose compassion was as strong as his orthodoxy.
He taught unapologetically, for instance, that homosexual activity was contrary to the teaching of Scripture and the Church. Yet he opened New York State's first AIDS-only unit, at St. Clare's Hospital, and gave thousands of hours of personal volunteer service to the AIDS patients, emptying their bedpans and tending to their other needs.
He was loud and clear about the immorality of abortion. Yet from his first moment in New York, he issued an urgent invitation to any woman anywhere who felt tempted to abort her child. "Come to me," he said. "The resources of the Archdiocese of New York will be at your service to assist you and your child." It was a promise he repeated continually.
Along with founding the Sisters of Life, he was instrumental in starting Priests for Life. After ordaining me and letting me do parish work for several years, he gave me permission to head Priests for Life on a full-time basis. "I know of no effort more noble, more timely or important than the recruitment of our clergy in the cause for life," he later wrote to me. "I remain convinced that the Priests for Life, by their Masses, prayers and example, will cause this great country to one day again follow God's Will for Life."
Thank you, Cardinal O'Connor, for being a mentor to me and so many others!
This column can be found online at http://www.priestsforlife.org/articles/document.aspx?id=3155
Comments on this column? Go to AskFrFrank.com
Fr. Frank's columns are podcast. See PriestsForLife.org/Podcast

Zemanta helped me add links & pictures to this email. It can do it for you too.
Posted by Deacon John at 3:20 PM