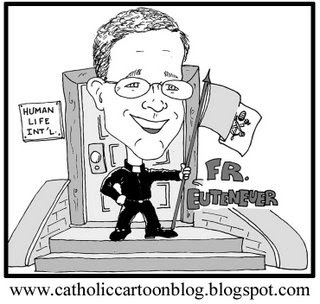 
READ THE BIBLE IN ONE YEAR: http://www.oneyearbibleonline.com/march.asp?version=63&startmmdd=0101

(Mat 10:24-25) The disciple is not above the master, nor the servant above his lord. It is enough for the disciple that he be as his master, and the servant as his lord. If they have called the good man of the house Beelzebub, how much more them of his household?

ANGER, DESPAIR AND REVENGE IN THE HEADLINES

TIMELY COMMENTARY by Fr. Euteneuer: Piercing the Darkness
Even a casual observer of American society can tell that there is a certain sinister chaos spreading throughout every aspect of public life these days. Naturally, as it filters through society it finds its way into our homes, families and personal lives as well. The reports of monumental breakups and takeovers, meltdowns, dysfunctions, cutbacks, disasters, protests, catastrophic events, scandals, and just plain moral chaos are, shall we say, legion, and it does not look like there will be any let up in the dismantling of our formerly decent society any time soon. Public officials and the movers-and-shakers of social communications long ago divorced American culture from authentic Christian values, and the result is that modern America has found itself first wandering then running down a very slippery slope to moral and social anarchy. The darkness has settled upon us.

This idea came home to me this week when I attended the 5th Anniversary Mass of Terri Schindler Schiavo at Ave Maria University in FL. How well I remember the horrible killing scene in Pinellas Park, FL in 2005 when the combined efforts of pro-lifers and some political allies were not able to stop the forward motion of such raw evil. From the Florida circuit courts all the way up to the US Supreme Court, the corrupt judiciaries refused to intervene and even ordered her killing, with impunity. The US Congress was almost laughably powerless to help. The utter uselessness of the bishop and clergy in the diocese where Terri was murdered was a microcosm of the Church Impotent rather than the Church Militant. The thousands of calls that the Terri Schindler Schiavo Foundation now gets in their attempt to stop other similar killings are an indication that this same darkness is now penetrating our society at an alarming level.

Every aspect of American society is touched by this chaos: the pervasive and unstoppable corruption in government, the major media, Hollywood, academia, healthcare, and even within our own churches! All of this corruption is multiplying the shadows over our society and penetrating into every aspect of personal and family life as we speak.

What I find most alarming, as an exorcist, is the spread of truly occult phenomena in our youth culture. It used to be that vampires had to go back into their coffins with the first streaks of dawn. Now handsome young vampires are sullying the covers of every gossip magazine and tantalizing prime time audiences with their evil - and teenage girls are just swooning for them.... Don't be fooled: the vampire culture is the spawn of the Harry Potter culture that has washed over our youth for a decade and still seduces parents into thinking it is all just "harmless entertainment." Kids dressing up as sorcerers, blogging about vampires, dabbling in Wicca - it's just plain seductive and evil. Our Baptismal Promises demand that we "reject Satan and all his works and all his empty promises," and that includes demons, witches and vampires!

If I were anything other than a Christian, I would probably despair of the status of the culture all around us. Yes, there are movements fighting to take the culture and politics back, but most of these are just about political power and, if they have an effect at all, they will just install another version of corruption in place of the political devils they cast out.

The reason I don't despair in the face of all this darkness, though, is because I remember that once-upon-a-time Evil had its Hour. I am not talking about sixty-minutes of willowy darkness. I am talking about the worst crime ever committed in history, the blackest deed ever known to man: the killing of the Son of God on Calvary. The corrupt politicians, clergy and laity of the day were all implicated in the crime. Worst of all, the devil was sitting back gloating at his masterpiece of evil.

But much to the devil's surprise, evil did not win the Day...because at that very moment of deepest darkness, the Son of God did something utterly unforeseen and caught the whole wicked world unaware: He shattered the darkness and rose from the dead! Who would have imagined!

Ever after, those who persevere through Good Friday looking toward the joy of Easter Sunday find themselves immersed in the same eternal mystery of Light. Christ has pierced the darkness and given us Hope! We can sing the great "Te Deum" hymn with the greatest fervor now in every dark hour of our lives: "In you Lord is our hope - and we shall never hope in vain!"


Ladder of Divine Ascent excerpt: Step 26- "On discernment of thoughts, passions, and virtues"

6. After God, let us have our conscience as our mentor and rule in all things, so that we may know which way the wind is blowing and set our sails accordingly.     Prayer request?  Send an email to: PrayerRequest3@aol.com