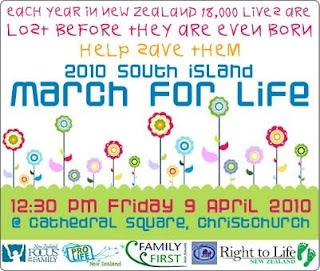 Christchurch (Agenzia Fides) – New Zealand has stood up in defense of life. As reported by local sources, in recent days the city of Christchurch - the third largest city in the country, with 360,000 inhabitants – held the first March for Life ever in New Zealand. The initiative has proved a success, with the participation of over 300 marchers from the pro-life movement and civil society, with the spontaneous adhesion of many people who have joined the procession, while it made its way through the streets. The initiative was attended in particular by young people and this, notes the local Church, is a sign of hope for the country.
The participants spoke out against practices such as abortion and euthanasia, speaking in defense of life, especially the unborn, the weakest, and the least protected legally.
The first ever March For Life held in New Zealand focused especially on the application by the pro-abortion Family Planning Association, a member of the International Planned Parenthood Federation, to the New Zealand Abortion Supervisory Committee for a license to use the chemical abortion drug RU 486 at their Hamilton clinic.
Prolife New Zealand has stated that approval of the deadly abortifacient drug would open the door to further destruction of human life in the country, which already has approximately 18,000 pre-born babies killed every year by surgical abortion.
"It is imperative that we all take a strong stand against child abuse, whether it occurs before or after birth. If we place a low value on pre-born babies, then at the end of the day, this attitude will impact on the value we place on all human life. It is a very dangerous way to go," said March for Life spokeswoman, Sargia Harrison.