"This is a hate crime -- hatred of God, His word and His law." -- Rev. Flip Benham, Operation Save America 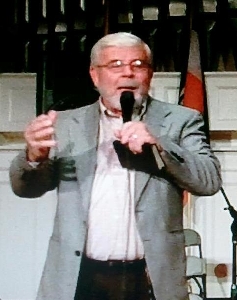 JACKSON, Miss., April 17, 2013 /Christian Newswire/ -- A Pastor preaching on the public sidewalk at the corner in front of All Women's Health has just been arrested by Jackson Police while he was preaching. The preacher, Chet Gallagher (photo) from Las Vegas, was called over by police in the middle of his preaching. He asked that they come to him unless he was under arrest and at that time they said he was under arrest. When asked what the charges were the police refused to answer. Other pastors are now trying to discover why he was arrested and cannot even locate where police have taken him.
The Operation Save America, States of Refuge Campaign has been in Jackson hoping that the will of the people of Mississippi will prevail and Mississippi will become the first abortion-free state in America. The local churches of Jackson have joined OSA in having church on the sidewalk near the killing place. It is amazing that this happened on April 17, the day before the Mississippi Health Department was originally scheduled to close down this illegal clinic for violation of Mississippi Law. US District Court Judge Daniel P. Jordan extended an injunction he issued several months ago to block the State of Mississippi from shutting down forever this dangerous clinic.
"When the Church of Jesus Christ comes out of her walls to join us in defending the innocent, oppression increases." Rev. Flip Benham, Operation Save America. This is a hate crime -- hatred of God, His word and His law.
"…all who hate me love death." Proverbs 8:36.
The people of Mississippi elected a governor and a legislature determined to free their state of the blood of the innocent but the renegade courts and Jackson police are determined to counter their wishes.