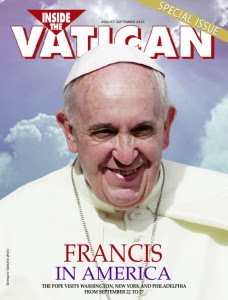 Our special 132-page Commemorative Edition of Inside the Vatican magazine welcoming Pope Francis to America is out.


Subscribe now to receive this Commemorative issue for free.  Stay informed on the critical events occurring in the Catholic Church in the coming months. Don’t miss an issue!


Normally, I don;t post these long letters but this one 'hits the nail on the head' and is prophetic in showing us what lies ahead for devout Christians.
Deacon John


Prison
“If a law is unjust, a man is not only right to disobey it, he is obligated to do so.” —Widely attributed to Thomas Jefferson (some say this quotation is apocryphal)
“If the machine of government is of such a nature that it requires you to be the agent of injustice to another, then, I say, break the law.”—Henry David Thoreau, whose treatment of civil disobedience in the face of unjust laws influenced Dr. Martin Luther King, Jr.
Innocent Prisoner
An innocent woman is in prison tonight in Kentucky. Her name is Kim Davis.
She is in prison because one of the laws of her country, the United States of America, is unjust.
She has, rightly, refused to obey that law.
According to that unjust law, she must abandon her own deeply held belief and accept the justice of the law, or be arrested and jailed.
She has chosen to accept arrest and jail rather than abandon her belief. (Here is a link to a detailed story about the case by the New York Times.)
So begins a confrontation that was inevitable, a conflict between judicial tyranny and individual courage.
And it is a story that could be of interest to Pope Francis, who has said all children deserve and have an inalienable right to a father and a mother.
Indeed, a Church source advises that Francis may soon decide to delegate a personal representative to visit Kim on his behalf...
==============================

=============================
This case is the result of a wrong and unjust law passed on June 26 by the US Supreme Court when it ruled to permit homosexual "marriage" throughout the US. (Note: The ruling passed in a close 5-4 vote; but two of the 5 approving Justices should have recused themselves, because they had already presided over homosexual "marriages" and so had prejudged the case before hearing arguments; this means the vote was not only very close but actually illegitimate from the outset).
Kim is the first of many US citizens unwilling to abandon their principles before such an unjust law.
The consequence today? One of the saddest -- and most shocking -- things ever to happen in modern America: an ordinary American citizen has been dragged off to prison simply for refusing to violate her Christian beliefs on marriage. 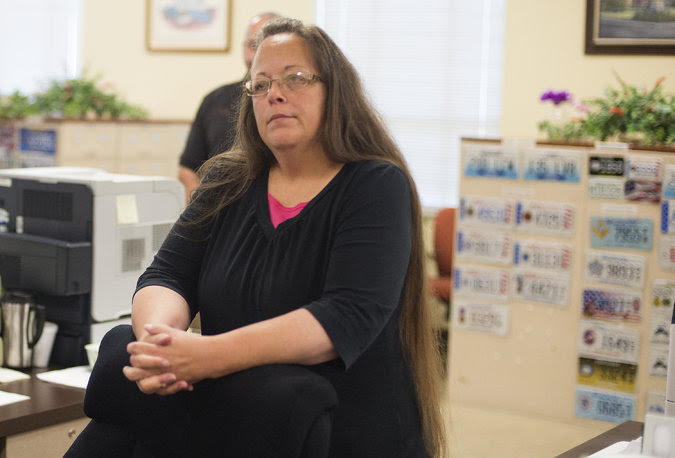 Note: For those who would like to travel with us on pilgrimage:
We have several pilgrimages schedule in the coming year.  For the complete schedule, click here.
On December 8, 2015, and again on November 20, 2016, we will be  in Rome when Pope Francis opens the Holy Door to begin the Special Jubilee of Mercy, and when he closes the door to end the Jubilee Year. If you would like to join us, email now for more information...
We also often travel to Norcia, in central Italy, where there is a flourishing Benedictine monastery we visit.
Every single subscriber is valuable to us. Please take a subscription -- it is a very important help to us...
To subscribe, click on the line above or the icon below to subscribe!

What is the glory of God?
"The glory of God is man alive; but the life of man is the vision of God." —St. Irenaeus of Lyons, in the territory of France, in his great work Against All Heresies, written c. 180 A.D.
Posted by Deacon John at 10:48 AM