From 40 Days For Life: DAY 7: No one grows up wanting an abortion

Dear Deacon John,
Abortion is generational.
It impacts parents, grandparents and siblings who will never know the child. It also alters the future, as the child will never be able to leave a mark on the world … or have children or grandchildren.
It would seem that abortion should be unthinkable.
No woman grows up wanting to have an abortion. But women are often pressured ... and told it’s the best way out of a bad situation.
The woman may be single and afraid. She may have no income. But the baby is not the problem; the problem is the bad situation.
Today, we hear about two young women. One found strength to overcome that worldly pressure. Please pray that the other may do likewise. 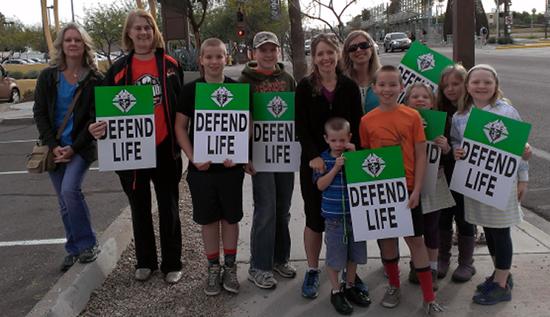 “It’s complicated.” That’s become something of a catch phrase, but Lisa in Tempe says it’s a good description of the situation one young woman finds herself in – a young woman who needs your prayers.
Volunteers spoke to her outside the Planned Parenthood abortion center. Actually, it was her mother who started the conversation. “What can you do to help?” she asked.
The response was simple. “Well, what do you need help with?”
The volunteers were handed a rather fuzzy ultrasound image. After a brief discussion, the young woman, her mother – and her grandmother, who was also with them – were directed to a pregnancy help center where they could get some life-affirming guidance.
They visited, and they talked. But the young woman still has an appointment for an abortion.
“Please pray for divine intervention and that the walls of fear will come tumbling down,” Lisa requested.  “Give this family strength, dear Lord, to carry this pregnancy to term.”
Kitchener, Ontario 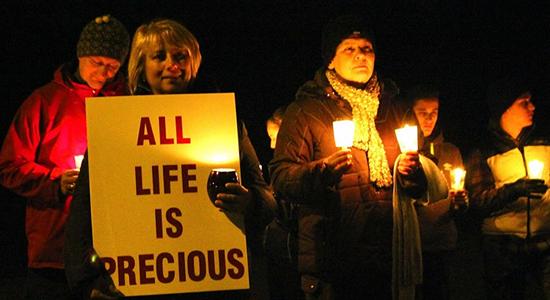 Two 40 Days for Life prayer volunteers were standing near Freeport Hospital in Kitchener when a young woman, who looked to be about 19, walked up and asked what they were doing.
They explained that they are peacefully praying for mothers contemplating abortion, so that they may think twice about it and decide against it, to spare the life of the baby.
The young woman then shared her story. She was in this hospital’s waiting room ... when she was 16 years old and pregnant. Her mother and other family members were pressuring her to have an abortion, to “get rid of the baby.”
On the day of her appointment, a nurse also told her – numerous times – that she should have the abortion. But as time for the abortion drew closer, something came over her.
She simply could not go through with it.
She left the hospital … and today she is the very happy mother of a 2-year-old son.
“She thanked us for doing what we do,” said Ewelina in Kitchener. She also she would try to come out to stand and pray with the volunteers.
“Thanks be to God,” Ewelina said, “for you – for giving up your time to be a witness for the unborn and saving lives!”
Here's today's devotional from Fr. Terry Gensemer, the National Director of the Charismatic Episcopal Church for Life.
Day 7 intention

May we have a heart and a zeal to save the poor and release the oppressed.
Scripture

The Spirit of the Lord is upon Me, because He has anointed Me to preach the gospel to the poor; He has sent Me to heal the brokenhearted, to proclaim liberty to the captives and recovery of sight to the blind, to set at liberty those who are oppressed.
— Luke 4:18-19
Reflection from Fr. Terry Gensemer

This passage is a very familiar one. It has been preached on many occasions, even made popular in books and songs. Though the quote is about Jesus, all Christians take this commission seriously as a directive on how to reach the world with the gospel.
We, like our Savior, are to bring the good news to the poor, the brokenhearted, those in captivity, those who cannot see, and the oppressed.
The commission given to us in this passage is clearly a charge to care for those for whom God cares the most. I wonder though, whom do we look for to be touched by the Holy Spirit as we go out into the world?
Who are the poor, if not those unborn children who have been abandoned by their parents before they ever leave the womb?
Who are the brokenhearted, if not those unborn children whose only example of love is having their mother take them to an abortion clinic to be destroyed, or the mother of a child who has been deceived by everyone around her into believing that what she is doing is best for her and her child?
Who are the captives, if not those unborn children who are bound over to death by the "choice" of abortion?
Who is more blind than an unborn child in the darkness of a womb that has become a waiting room for their death?
And who is more oppressed than those unborn children whose oppression has been legitimized by their government, their church and even their family and loved ones?
Prayer
Lord, You empower us with Your Spirit to do your will in the earth. Send us to the poorest, the most broken, the most captive, the most blind and the most oppressed in the world, the innocent pre-born children in their mother's wombs that are scheduled for destruction. Help us to bring them healing, liberty, sight and justice through Jesus Christ our Lord, Amen.
Printable devotional
To download today's devotional as a formatted, printable PDF to share with friends:
http://40daysforlife.com/media/day07.pdf
For life,
Posted by Deacon John at 12:59 PM