Dear Deacon John,
It may come as a surprise ... but the media has been a big boost during the first week of this 40 Days for Life campaign. It's probably not news to you that for the most part, the mainstream national media ignores abortion. But that isn't always true at the local level. Countless local news reporters and editors are more than willing to let us tell our side of the story ... reaching thousands of people who've never heard of 40 Days for Life – or never even known there was an abortion center in town. As a bonus, local 40 Days for Life leaders are great in media interviews!
Abortion workers usually won't go on camera. Some may only do so to read a statement from a corporate office. They can come off very distant and cold ... while 40 Days for Life leaders are warm and joyful. Here are a few campaigns that have had the opportunity to share their stories ... thanks to local media that were willing to listen.
Green Bay, Wisconsin

PHOTO COURTESY GREEN BAY PRESS-GAZETTE
The Green Bay Press-Gazette spoke to local coordinator Jim Ball and other volunteers. Jim explained to the reporter that 40 Days for Life is peaceful and consists of “constant prayer and quiet witness.”
Jim says the volunteers are praying that Planned Parenthood will close its doors.
“The goal is always to end the killing of babies,” he said. “That’s just simply it. What a mother carries in her womb is a human being. Every medical school will teach that, even though legally we won’t admit that.”
Fifteen previous 40 Days for Life campaigns have been held in Green Bay. But this year’s vigil has grown due to outrage over the Planned Parenthood aborted baby parts trafficking scandal.
Columbus, Georgia 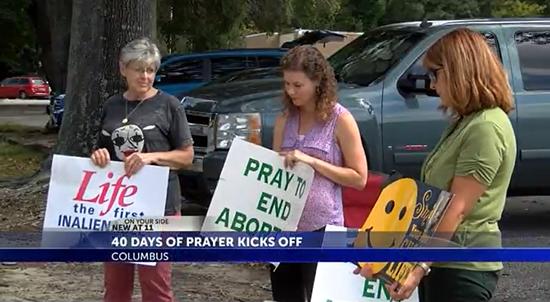 PHOTO COURTESY WRBL-TV
WRBL-TV, the area’s CBS affiliate, covered the 40 Days for Life kickoff event in Columbus.
“The campaign’s goal is to end abortion,” the station reported. “Pro-life supporters across the country will gather outside of abortion clinics for 40 days to pray for everyone involved in the abortion process.”
The station interviewed Kelly, who became pregnant when she was a teen and visited three abortion centers.
“When I went to that abortion clinic I needed help and I needed somebody I could talk to.  I didn’t necessarily want an abortion.  I just needed help,” she said. She added that she was grateful for the decision she made to keep her son.
While many of the 307 vigils are held outside Planned Parenthood centers, Columbus is one of the cities where Planned Parenthood doesn’t operate. The vigil there is outside an abortion facility called Columbus Women’s Health Organization.
Tri-Cities, Washington 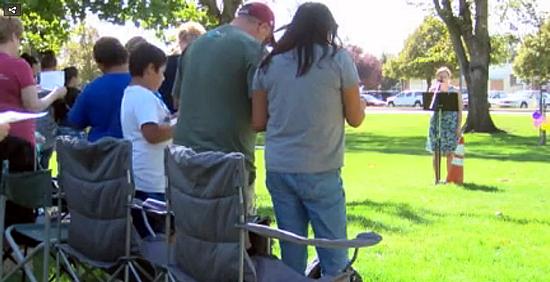 PHOTO COURTESY KEPR-TV
KEPR-TV, the local CBS station, sent a crew to the Tri-Cities kickoff and noted the festive atmosphere included food, music and various speakers.
“This event was the start to 40 Days for Life – a worldwide movement,” the station reported. “The organizers say it's 40 days of prayer, vigil, fasting and community outreach to work towards ending abortion.” “People will sign up for hour long slots and go and pray at Planned Parenthood as a peaceful and silent witness to end abortion,” said Karen Nyman, coordinator of the rally. The report noted that 40 Days for Life has been going on in the Tri-Cities area since 2008 … and observed that here, as in many other locations, interest has picked up in the wake of Planned Parenthood’s recent spate of bad publicity.
Today’s devotional is from Randolph Sly of the National Pro-life Religious Council.
Day 4 intention May the mystery of the Incarnation increase our zeal for defending life. Scripture Then the angel said to her, “Do not be afraid, Mary, for you have found favor with God. And behold, you will conceive in your womb and bring forth a Son, and shall call His name Jesus. He will be great, and will be called the Son of the Highest; and the Lord God will give Him the throne of His father David. And He will reign over the house of Jacob forever, and of His kingdom there will be no end.” — Luke 1:30-33 Reflection by Randolph Sly
“God has assumed Humanity, joining it with Divinity, and kindled in men's hearts new love of me.” These words were written by a Roman poet in the Fourth Century. He spent his life finding ways to express the greatest mystery of the world: the incarnation, in which God became man. The womb has been referred to as the “first home of the whole human race.” It is the place where life begins, where our stories start. In the womb the great men and women of history began their magnificent march through life. In the womb Divinity met humanity, and God the Son was born into the world. As one of the Fathers of the early church, St. Leo the Great, declared, “Within her spotless womb Wisdom built itself a house and the Word became flesh.” I was at the hospital for the birth of my fourth grandchild. Looking through the nursery window at the rows of newly born babies, I began to think of the great stories that would be written about these tiny lives. During his visitation with the Virgin Mary, the angel prophesied to Mary about the life of her child. Here in this hospital, I pondered, what would he say about each of these? Would they meet the one who also came from His mother's womb to redeem the world and kindle our hearts afresh for God? I thanked God for each baby alive and prayed for each story yet to be written. Prayer Heavenly Father, you have made the womb of each woman a very special place. Help us to hold fast to the sanctity of this first home of humanity, remembering the wonderful mystery, that God inhabited the womb of a young woman and came forth as the savior and deliverer of the world. We ask this in the Name of the one who came forth, Jesus Christ our Lord, Amen. Printable devotional To download today’s devotional as a formatted, printable PDF to share:
http://40daysforlife.com/media/day04.pdf