Dear Deacon John,
In this first week of the 40 Days for Life campaign, the enthusiasm level has been huge ... especially among new participants. I’ve had the privilege of helping to kick off 40 Days for Life in Nashville and Louisville. Steve Karlen, our North American outreach director, attended events in Wisconsin, Ohio and Illinois. Robert Colquhoun, our international outreach director, traveled to Slovenia and has more countries to visit soon. Wherever we go, we’re meeting faithful people who have been coming out to the vigil for the very first time. If you haven't gone to one of the 307 campaigns currently under way, then find the one nearest you and take part!
We need to ask for God’s mercy in bringing the scandal of abortion to an end ... and that comes through prayer. Here's a quick tour of what can happen when you go and pray:
Harrisburg, Pennsylvania 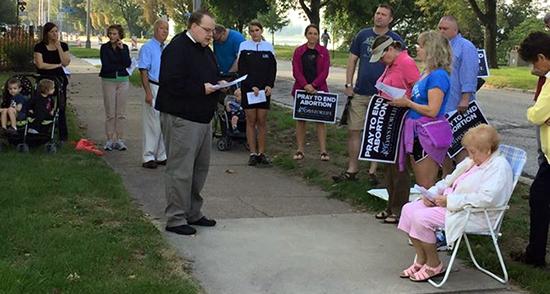 The Hillcrest abortion facility was scheduled to be open for abortions the morning of the Harrisburg kickoff event. “Praise God they were not!” said Kathy, the local 40 Days for Life director. She was overjoyed that no babies lost their lives on this day.
“I was greatly encouraged to once again see longtime prayer warriors at Hillcrest, as well as new faces there to pray at the abortion business for the very first time,” she said. “We were a cross-denominational group of about 40 people.”
Rev. Luke Zimmerman, pastor of Calvary Lutheran Church in Mechanicsburg, led prayer. “We sang, we prayed together and encouraged each other to come back to pray,” said Kathy, “and to bring others!”
Lansing, Michigan

The 40 Days for Life kickoff at Glad Tidings Church drew a crowd of several dozen people, united in faith and conscience, to see an end to abortion in Lansing. The kickoff and candlelight vigil were held just blocks away from the WomanCare abortion facility.
They heard the story of a couple who remained silent about their own abortion for 22 years, but found healing through Christ's love at a Rachel's Vineyard retreat. Fr. John Byers helped conclude the evening by leading the group in prayer outside the abortion center.
Klamath Falls, Oregon 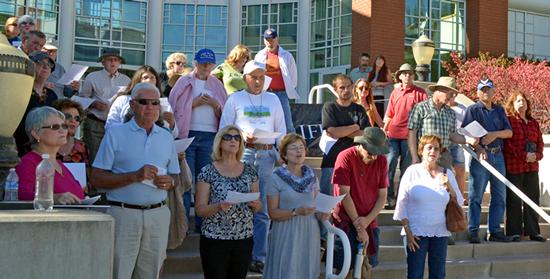 Diane checked in from the Klamath Falls campaign, where the vigil is held near the county health department. “It was a warm 80 degrees,” she said. “Here in South Central Oregon, east of the Cascades, we use umbrellas for the sun as well as the rain.”
The campaign is growing, Diane explained, as more volunteers are finding out about the vigil and joining to pray for an end to abortion. Participation has tripled since the first campaign. “God is good!” she said.
Cincinnati, Ohio

Mary in Cincinnati says the opening of the 40 Days for Life vigil featured “moving and inspiring words from Fr. Cyril Whitaker, S.J., an associate professor at Xavier University, who is always so appreciative of our public prayer witness and perseverance.” Fr. Matt Cushing from St. Anthony Parish in Northern Kentucky led the closing prayer. “I believe we are off to a good start for this campaign!” she said.
Birmingham, England
Birmingham is now conducting its ninth 40 Days for Life campaign. “We had a record turnout for the kickoff,” said Isabel, the local coordinator, “with 135 people. It was great to see lots of new faces.”
Isabel noted good support from evangelical Christians in the area as well as the continued support from the local Catholic seminary, with groups who pray for three hours each week at the vigil. Archbishop Bernard Longley, who has prayed outside the abortion center, again voiced his support.
“Considering the great support we are getting in Birmingham,” Isabel said, “I fail to see how the abortion clinic can hold open its gates much longer to prevail against the continued prayers being faithfully offered on its doorstep.”
Here's today's devotional from Rev. Ben Sheldon, president emeritus of Presbyterians Pro-Life...
Day 5 intention
May the truth of the final judgment shape our thoughts, priorities, and choices here on earth.
Scripture
The King will answer and say to them, "Assuredly, I say to you, inasmuch as you did it to one of the least of these my brethren, you did it to me."
— Matthew 25:31-46
Reflection
Caring for others is not optional. Jesus' picture of the final judgment concludes with this sobering word: the wicked, who failed to care for others in their various needs (e.g., the hungry, the thirsty, the aliens, the naked, the sick, the imprisoned) will go away into everlasting punishment, but the righteous who did seek to meet those needs will end up with him, enjoying eternal life. We know that this was no parable! Jesus has given us fair warning! Everything in God's Word points to the truth that compassionate concern and practical care for all people, especially for the poor, the destitute, the weak and needy is required of us, if indeed we hope to escape the punishment of the fire of hell. And who are the poor and needy, if not helpless, unborn babies, as well as the aged and infirm at the other end of life? Surely the "least of these" embraces not only those at both ends of the continuum of life, but all others in between. Just how we, as Christ's true followers, respond to his admonition "inasmuch as you did it to the least of these, you did it to me" will determine whether we enjoy eternal bliss in his presence or the bleak and dreadful reality of eternal punishment in hell. Nothing in God's Word could be clearer!
Prayer
Gracious and merciful Father, we gladly embrace your Word that counsels us to care for the least of your children, and we renew our dedication to defending the unborn and all whose right to life is compromised by our godless society's selfish lack of concern. Free us from our own failures and sins so that we will be truly pro-life in every area of our lives. Through Jesus Christ our Lord, Amen.
Printable devotional
To download today's devotional as a formatted, printable PDF to share with friends:
http://40daysforlife.com/media/day05.pdf
For life,
Posted by Deacon John at 9:31 AM