Pro-Life Movement is Alive and Well on the Eve of the 35th Roe v. Wade Memorial 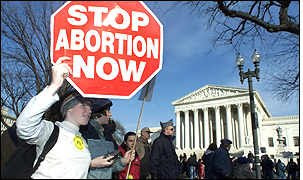 "Support for abortion, and abortions themselves, are at their lowest levels in over 30 years." -- Rev. Patrick J. Mahoney, Director of the Christian Defense Coalition

WASHINGTON, Jan. 21 /Christian Newswire/ -- Pro-life activists are now focusing their attention away from Washington, D.C. and aggressively turning their sights to state and local initiatives.
Rev. Patrick J. Mahoney, Director of the Christian Defense Coalition, comments, "On the eve of the 35th Memorial of Roe v. Wade, the pro-life movement is alive and well. Support for abortion, and abortions themselves, are at their lowest levels in over 30 years. This past Sunday thousands of churches preached messages on 'The Sanctity of Life,' and tens of thousands participated in statewide pro-life rallies and marches. On Tuesday, January 22, over 100,000 will join the annual 'March for Life,' in Washington, DC. On the pro-choice side, we see virtually no major events happening on the national stage.
"Here is a list of some of the positive things happening in the pro-life movement:
Crisis pregnancy centers, which care for women with crisis pregnancies at no charge, outnumber abortion clinics 3 to 1.
A recent Gallup Poll shows that 72% of Americans 18 and under believe that abortion is 'immoral.'
85% of counties in America do not have an abortion clinic.
All candidates running for the Office of President believe abortion is a tragic, and regrettable decision.
Young physicians are choosing not to become involved in the abortion industry creating a massive shortage of abortion providers.
At least ten states are considering legislation to ban abortions and introduce Human Life Amendments.
For the first time in 35 years, the United States Supreme Court banned an abortion procedure.
"As the political landscape has changed in Washington, DC, the pro-life movement has adapted and is now focusing their attention on state and local initiatives. We see that in the citizen led grand jury convened in Wichita, Kansas against abortion provider George Tiller as well as state Human Life Amendments like the one recently introduced in Georgia. These efforts are bypassing the gridlock in Washington on abortion and chipping away at Roe from a local level."
For more information or interviews call:
Rev. Patrick J. Mahoney at 202.547.1735 Cell: 540.538.4741
Posted by Deacon John at 8:39 AM