Quintuplets Born in UK in Defiance of Medical Pressure to Abort 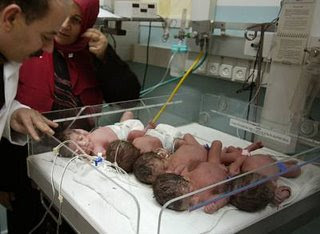 OXFORD, January 4, 2008 (LifeSiteNews.com) - The quintuplets of a Russian couple were born in the UK after doctors in Russia denied them care unless they aborted some of them.

Dimitri and Varvara Artamkin, both Russian natives, gave birth to five girls at the John Radcliffe Hospital in Oxford last month. Each of the babies now weighs 3 pounds 3 ounces, and they have been separated since birth so they can undergo incubation in two hospitals.

Dmitri, a mathematics professor, says that the children are each a gift from God.

"We believe God has given them to us as a gift and sent us here, to Britain, to give them the best possible chance," he said. "We don't yet know when we'll be able to take them home - it depends on the progress they make. But we're praying it will be soon."

Dmitri and Varvara come from strong religious backgrounds; both were brought up in the Russian Orthodox Church. They tried to have a baby but were unable to during the first seven years of their marriage. They eventually tried fertility treatments, and were surprised when they discovered that they were pregnant with five children instead of one.

"We love children so much and have always wanted to have lots," said Varvara, a music teacher. "We both come from big families so to us, having lots of children seems normal. I am one of four children, Dimitri is one of nine, and we have 13 nephews and nieces. We have always been surrounded by children and we prayed to God to send us children. What happened to us last year was very sad but we always believed we would have another chance."

"We were very happy when we first found out but we couldn't celebrate because the doctors told us straight away that it would be impossible to have all of them," said Dimitri. "Then all we could feel was worry."

The couple refused to have selective abortion, and because of that were turned away by most Russian doctors due to the risk to Varvara that was posed by so many children being born at once.

"We just said no as soon as they told us. We prayed to be given children and God granted our prayer - to kill them would be totally against everything we believe," said Dimitri. "We go to church every week and believe very strongly in our faith. Varvara's father is a priest in the Russian Orthodox church. For us, having the abortions was not even an option. It was a frightening and sad time for us but we knew we had to have all the babies. We could see all of them on the ultrasounds and each one was a little person. It was not something we even had to discuss."

The quintuplets, named Elizaveta, Alexandra, Nadezhda, Tatiana and Varvara, are the first to be born in the UK in five years. The parents are waiting for them to be strong enough to all be gathered together again. They were very thankful for the amount of support that people have shown them in the past weeks.

"The people we have met since being in this country have been fantastic," said Varvara. "The level of care the babies have received is amazing and strangers have been so kind in sending us gifts. We want everyone here to know how thankful we are. We are a little overwhelmed by all the attention but we know we have everyone's best wishes."

The couple had the babies baptized the day after their birth and their families are planning a big celebration and to help with childcare when they return to Russia. Both Dimitri and Varvara say that they would like to have even more children, although both hope eventually to return to their jobs.

Russian Couple Flees to Britain to Save Their Unborn Quintuplets from Abortion
http://www.lifesite.net/ldn/2007/nov/07111610.html

Parents Have Quadruplets After Having Twins Two Years Ago
http://www.lifesite.net/ldn/2007/dec/07122107.html ;