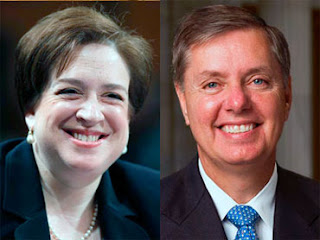 Oh, and he's voting for Elena Kagan for Supreme Court (can you believe it? No way.)

Apparently, in defending Graham's earth-shattering announcement that he will support her, his team fancies Graham a "thinking person's conservative," "not a demagogue," and one who will "do well among voters with IQ's in triple digits."

There you have it South Carolina, if you disagree with Senator Demagogue, he thinks you are stupid.

But guess what? He also thinks you are a bigot, an angry white guy, and he hopes that the Tea Party movement "dies out."

Other than in a conversation about getting rid of him from the Senate, just how is this guy relevant at all?