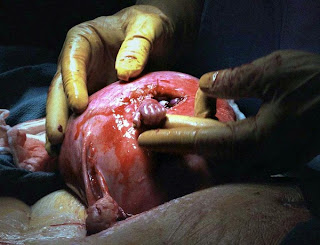 OPINION, July 15 /Christian Newswire/ -- Gregg Cunningham, Director of the Center For Bio-Ethical Reform, submits the following and is available for comment:

In addition to coverage by this news organization, a profile in extraordinary treachery was reported on June 11, 2010, by USAToday.com, headlined "Florida Gov. Charlie Crist vetoes ultrasound bill." It quoted Mr. Crist, who has consistently claimed to be pro-life when he wasn't consistently claiming that he wasn't: "'This bill places an inappropriate burden on a woman seeking to terminate a pregnancy,' Crist said in his veto message." The bill would have "... required most women to have an ultrasound before having an abortion, unless the woman could prove she was a victim of rape, incest, domestic violence or human trafficking. Women could choose not to see the ultrasound or hear a description of it." How could a safe, inexpensive ultrasound scan, at which a mother cannot be compelled to look and to whose description she cannot be forced to listen, constitute "an inappropriate burden"? It is indeed a burden but it is not inappropriate. Mr. Crist's political posturing is trivializing abortion by sparing the mother's conscience at the expense of her baby's life.

The governor and his new best friends in the abortion industry hate this bill because it rudely forces mothers and their abortionists to stop pretending. Assuming that she has a functioning conscience, a mother who looks at the ultrasound would be morally obligated to abandon her abortion -- or forced to kill a baby she can clearly see is not the blob of tissue her lying abortionist told her it was. If, however, she is afraid to look at the ultrasound before aborting, she is effectively admitting that she knew all along it wasn't just a blob of tissue and that her motive for averting her gaze was her desire to avoid the endless recollection of her child's first and only baby picture. Whether she looks or looks away, she would never be able to convincingly rationalize that she had no way of knowing what she was doing. For most mothers (and fathers) denial is the great facilitator in every decision to kill a baby. Intellectual honesty is Planned Parenthood's ablest enemy and an ultrasound, viewed or ignored, means no more head-games. It wouldn't save every baby but it would make abortion decisions far less delusional.

Equally tragically, the vetoed measure "... also included language that legislative Republicans wrote to prevent what they considered the possibility of federal funding being used for abortion in Florida, along with some provisions intended to thwart President Obama's national health care program." So now Florida taxpayers will get to fund the cost of butchering babies whose lives might have been saved by a revelatory ultrasound.

One also wonders what "strong personal views" would motivate the veto of a life-saving ultrasound bill -- unless the governor strongly believes that troubling a mother's conscience is a greater evil than taking a baby's life. The article further revealed that "... Crist has removed anti-abortion language from his campaign website." Why not, after also abandoning the Republican Party to improve his prospects for election to the U.S. Senate? Mr. Crist has been all over the moral map on this issue but he has now made his pact with the devil. This had better be a really great job because the governor wants it badly enough to trade his soul and [THE LIVES OF] Florida's children.


Zemanta helped me add links & pictures to this email. It can do it for you too.
Posted by Deacon John at 7:36 PM