Dear Deacon John,
Only a few 40 Days for Life locations are "blessed" with active opposition. However, when it does happen, it really isn't a surprise. After all, Christ did alert us to the prospects of persecution when we act in His name. Here are a few instances in which 40 Days for Life volunteers are responding to protesters ... with grace and love. Columbia, Missouri 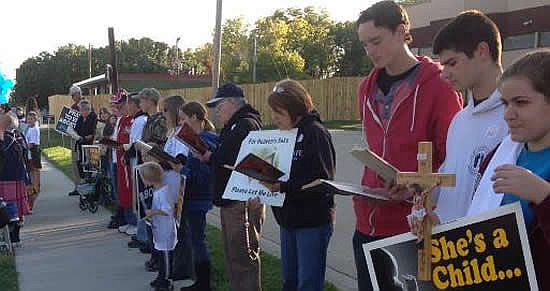 It appeared that Planned Parenthood was trying to organize a protest that would coincide with a 40 Days for Life rally on the sidewalk outside. But it didn't exactly work out the way they'd hoped. There's a fairly regular protester in Columbia. She arrived right at the start of the 5 pm event and started to make phone calls. "Very quickly," said Kathy in Columbia, "Planned Parenthood workers were sent out with signs to stand in a place across the driveway from us." As soon as the hour ended, the Planned Parenthood protesters left the sidewalk and gathered for their group picture. And then they left. The 40 Days for Life event that was going on at the same time was a totally different story. "I've got to tell you," Kathy said, "having the young people on the sidewalk was one of the best parts of the rally. The sight of all of our dear friends ... was something I will always cherish.”
Halifax, Nova Scotia

The Dallas vigil was visited by around 15 pro-abortion protesters. "We have a great relationship with the police," said Lauren in Dallas, "so they asked the protesters to stay on the sidewalk across the busy road from the vigil site."   The protesters shouted at the teens who were praying outside the abortion center during a Dallas campaign youth day event. But Lauren said group leaders were able to use the distraction as a teaching moment. "In addition, several of our folks went to talk to the protesters," she said, "and I really pray they were able to plant some seeds." Here's today's devotional from Dr. James I. Lamb, executive director of Lutherans for Life. Day 36 intention
May the Lord of Light and Life unite us, shine in us and through us to make a difference in the darkness.
Scripture
For at one time you were darkness, but now you are light in the Lord. Walk as children of light (for the fruit of light is found in all that is good and right and true), and try to discern what is pleasing to the Lord. Take no part in the unfruitful works of darkness, but instead expose them.
-- Ephesians 5:8-13 Reflection by Dr. James I. Lamb
For centuries physicists debated the nature of light. Two theories surfaced. The "corpuscular theory" maintained that light consisted of particles emitted from a light source. This explained some properties of light, but not all. The "wave theory" stated that light emitted from its source as waves. Again, this explained some properties of light but not all. So, the debate continued. Did light consist of particles or waves?
In the early twentieth century, Albert Einstein answered the question-"Yes!" (And you thought Einstein was complicated!) He showed that light consists of "particles," little bundles of energy called "photons." However, when all of these photons zip along together, they behave as a wave.
Sometimes pro-life Christians can feel like a photon, a little particle of light, and we wonder if we can possibly make a difference in a world of darkness and death. The Bible, however, never talks about a "child of light" only "children of light." When Jesus said in Matthew 5:14, "You are the light of the world," "You" is plural. When you and I shine in the darkness, others shine with us. We are pro-life "photons" that form a wave of light that can and does make a difference in the darkness.
We are compelled to do so. Jesus hung and suffered on the darkness of the cross and paid the bloody price for our sins. Now the light of His empty tomb shines upon us through His Spirit cleansing us and declaring us "children of light." But we are called to be more than "glow in the dark" children of light. We are to "walk as children of light" and take no part in the "unfruitful works of darkness." But it does not stop with passive restraint. We "photons" are called to action, to "expose" the works of darkness.
40 Days for Life epitomizes this. Our prayer, witness, and truth spoken in love seeks to expose the darkness of death and bring others into the marvelous light of Jesus Christ. When we stand and pray, we never stand alone. The Light of the World is there and He joins you with your fellow "lights of the world." The wave of light He produces shatters the darkness. It changes and saves lives. Shine on fellow photons!
Prayer Shine Jesus, shine in us and through us into the darkness and upon those struggling in the darkness that they might be drawn to the Light of Life. Amen. Printable devotional To download today's devotional as a formatted, printable PDF to share with friends: http://40daysforlife.com/docs/fall2013day36print.pdf
For Life,
PS: How are you going to spend these last days of the 40 Days for Life campaign? Please share your thoughts by leaving a comment at today's blog: http://40daysforlife.com/blog/?p=5123
Posted by Deacon John at 12:15 PM