The Pope, Abortion, Mercy and Context 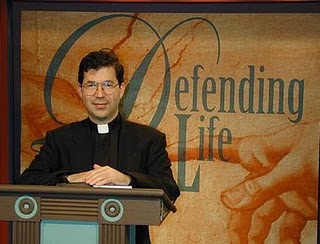 I have been privileged now to have been with Pope Francis four times since he has been elected to the papacy, and have been very encouraged by his approach to pro-life issues.
I have had two conversations with him about the work we do at Priests for Life.’ Our executive director, Janet Morana, has also spoken with him about our work. On all these occasions, he could not have been more encouraging.
That is why I was not alarmed when media outlets began reporting on his “criticism” of the focus of many leaders in the Church on issues like abortion.
The Pope is not criticizing the Church’s focus on abortion. He is actually protecting it. He is protecting it from being seen just as a “rule” or a “directive,” detached from the fundamental teachings of the faith that make us Christian in the first place, and detached from the compassion and mercy that Christ extends to those who have had abortions.
Regarding that latter point, the Pope made a special point to encourage me in my work as pastoral director of Rachel’s Vineyard Ministries throughout the world.
The Pope, who came to know of the ministry in Argentina, said to me, “Rachel’s Vineyard is very good; it is an excellent work! Go forward with that!”
The reason he is particularly affirmative of Rachel’s Vineyard, and of the Church’s overall work of healing after abortion, comes out in the recent interview that made headlines. He made it clear that in dealing with abortion, we have to extend mercy to those who have committed this sin. We who reject abortion do not reject those who have had abortions. Rather, we embrace them with forgiveness and peace.
The Pope is a man of peace: not only an advocate for peace in Syria and around the world, but for peace in the ravaged heart and soul of those who have had abortions.
This is the “context” in which the Pope wants the Church’s “No” to abortion to be understood. The “No” to abortion is only because we say “Yes” to the human person: the baby, yes, and with equal reverence the mom and dad and everyone else. There is not a pro-life leader I know who would not embrace that message.
The Pope, furthermore, is saying that moral imperatives – like the “No” to abortion – flow from the truths of the faith. He illustrated this in the homily he gave on June 16 to a massive crowd that had gathered in St. Peter’s Square for the worldwide “Day of the Gospel of Life.” Interestingly, the Pope did not use the word “abortion” in the homily, but his message was one of the strongest denunciations of it that I have heard.
He declared:


“All too often, as we know from experience, people do not choose life, they do not accept the “Gospel of Life” but let themselves be led by ideologies and ways of thinking that block life, that do not respect life, because they are dictated by selfishness, self-interest, profit, power, and pleasure, and not by love…As a result, the Living God is replaced by fleeting human idols which offer the intoxication of a flash of freedom, but in the end bring new forms of slavery and death.”

2014 Madonna Calendar
Only Available Until October 21st. Click the image to buy the calendar.
This, again, shows us what the Pope means by putting Church’s pro-life stance “in context.” He is not simply saying here that “abortion is wrong,” as if that is just some temporary “rule” separated from the really essential, permanent teachings of the faith. Instead, by explaining that God himself is life, and that attitudes that deny life are “idols,” he is saying that support for abortion is a denial of the faith itself and in fact a denial of belief in God.
By doing this, he is answering in a definitive way those who try to say that fighting abortion is just a “hobby” or an optional aspect of the Church’s work. He is answering those who see the Church’s opposition to abortion as nothing more than a plank in a political platform that might change when a new pope is elected, much like an administrative policy might change when a new president is elected.
Indeed, every teaching of the Church is to be understood in the context of all the other teachings, and indeed, of the entire history of the Church, which stands as a voice for all the oppressed and marginalized, including children still in the womb.