From 40 Days For Life: DAY 7: Courage in a global crisis

Dear Deacon John,
The abortion crisis takes more lives globally than war and disease combined. The numbers can be overwhelming ... so the solution must start with prayer. As 40 Days for Life continues to grow, faithful people in new countries are taking a leap of faith and bringing this campaign to their nations. The languages are different, but the message is the same: “Pray and fast for an end to abortion.”
There are vigils at 297 locations in 13 countries! Find the one nearest you … and get involved!
Here’s the latest from brand-new campaigns in Mexico and Croatia …
Mexico City, Mexico 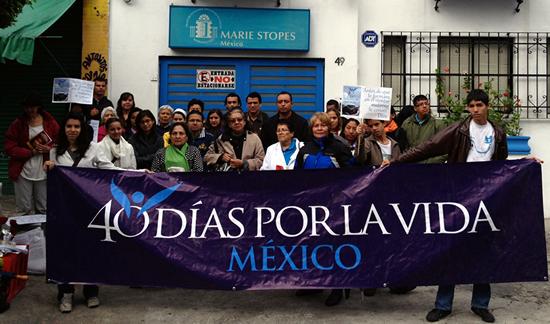 There’s great news from Lourdes, who is coordinating the first-ever 40 Days for Life vigil in Mexico City.
“A life was saved!” she said.
Vigil participants watched as a couple entered the facility. A few minutes later, the young woman ran out in tears. “The girl was so sad and had panic on her face,” Lourdes said. “That touched all of the volunteers.”
The man really wanted her to go back inside – in fact, he said she had to go back in for the abortion. His whole attitude changed when one of the volunteers said, “That child is also yours.”
The couple then walked away … and never went back in! 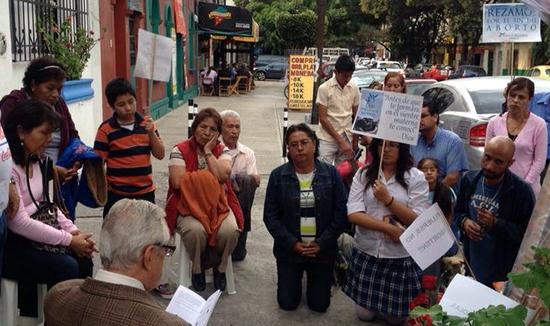 The campaign itself got off to a great start. “We had a successful kickoff event where more than hundred people attended,” Lourdes said.
The first morning of the vigil, the abortion facility hired private security guards to intimidate the volunteers. They also parked cars next to the building to keep the vigil participants at a distance.
“The second day,” she said, “local police arrived and the volunteers felt nervous.” But it was the private guards that the officers wanted to talk to. They were told to move the cars away from the building.
“The volunteers were astonished,” said Lourdes. “It is really impressive what prayer can do!”
Rijeka, Croatia 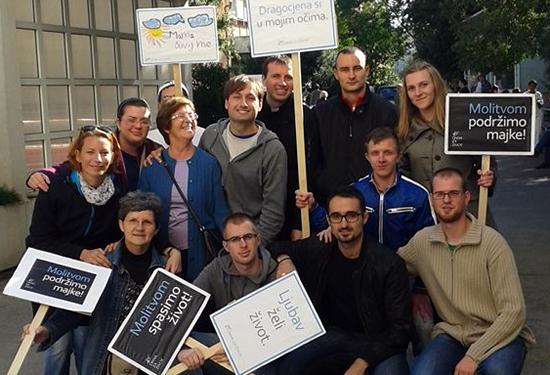 Ante, the 40 Days for Life leader in Zagreb, has been helping 40 Days for Life spread to other Croatian cities. He had asked people in Rijeka if they wanted to participate, but at first they were hesitant. Shortly before the campaign was to start, however, they saw the faith and courage of people in other cities and committed to the effort. They received approval from the local hospital to pray right in front of the door of the gynecology center.
“In Croatia,” Ante explained, “we don’t have abortion clinics, so we pray in front of hospitals, very far away from gynecology doors. So, Rijeka is greatly blessed to have that approval.”
He was able to spend some time with the volunteers in Rijeka. “After two hours, two provocateurs came, sneered at us, cursed and insulted us, took our pictures and recorded us. But they only stayed 15-20 minutes.” 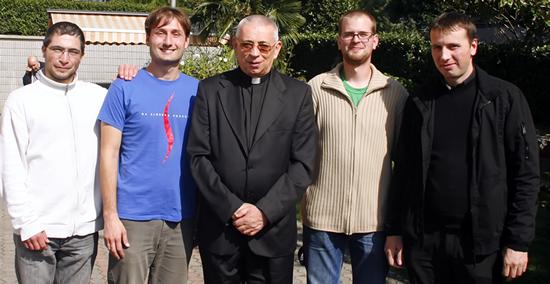 Ante also met the archbishop of Rijeka. “He blessed our actions. He is the third bishop who has publicly supported the initiative.”
Here's today's devotional from Fr. Terry Gensemer, the National Director of the Charismatic Episcopal Church for Life...
Day 7 intention May we have a heart and a zeal to save the poor and release the oppressed.
Scripture The Spirit of the Lord is upon Me, because He has anointed Me to preach the gospel to the poor; He has sent Me to heal the brokenhearted, to proclaim liberty to the captives and recovery of sight to the blind, to set at liberty those who are oppressed. — Luke 4:18-19
Reflection This passage is a very familiar one. It has been preached on many occasions, even made popular in books and songs. Though the quote is about Jesus, all Christians take this commission seriously as a directive on how to reach the world with the gospel. We, like our Savior, are to bring the good news to the poor, the brokenhearted, those in captivity, those who cannot see, and the oppressed. The commission given to us in this passage is clearly a charge to care for those for whom God cares the most. I wonder though, whom do we look for to be touched by the Holy Spirit as we go out into the world? Who are the poor, if not those unborn children who have been abandoned by their parents before they ever leave the womb? Who are the brokenhearted, if not those unborn children whose only example of love is having their mother take them to an abortion clinic to be destroyed, or the mother of a child who has been deceived by everyone around her into believing that what she is doing is best for her and her child? Who are the captives, if not those unborn children who are bound over to death by the "choice" of abortion? Who is more blind than an unborn child in the darkness of a womb that has become a waiting room for their death? And who is more oppressed than those unborn children whose oppression has been legitimized by their government, their church and even their family and loved ones?
Prayer
Lord, You empower us with Your Spirit to do your will in the earth. Send us to the poorest, the most broken, the most captive, the most blind and the most oppressed in the world, the innocent pre-born children in their mother's wombs that are scheduled for destruction. Help us to bring them healing, liberty, sight and justice through Jesus Christ our Lord, Amen.
Printable devotional
To download today's devotional as a formatted, printable PDF to share with friends:
http://40daysforlife.com/media/fall2014day07print.pdf
For Life,
Posted by Deacon John at 11:11 AM