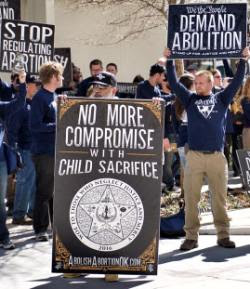 OKLAHOMA CITY, Okla., March 4, 2016 /Christian Newswire/ -- Hundreds of supporters of a recently filed Petition Initiative to Abolish Human Abortion in Oklahoma have been lobbying the Oklahoma Legislature to put forward a bill criminalizing abortion as murder.

The original plan was to put a Constitutional Amendment prohibiting abortion on the November ballot. The question would have allowed the people of Oklahoma to vote to end the practice of abortion or to retain it. But, the ACLU of Oklahoma filed a protest, halting the collection of signatures and forcing the Oklahoma Supreme Court to allow or deny the abolitionists their right to petition their government on behalf of the people. In light of this, supporters of the amendment have turned to the legislature.

On February 27th, abolitionists began circulating another petition demanding Oklahoma legislators fulfill their oaths of office and pass laws protecting and establishing justice for those being deprived of the Right to Life and those being "terminated" without due process of law. Within a week, abolitionists have collected nearly 10,000 signatures calling for the total and immediate abolition of abortion in Oklahoma (You can Read and Sign this petition here: AbolishAbortionOK.com).

Senator Joe Silk (R-Broken Bow) has heard their cry. In response to their petition, Sen. Silk has incorporated the language of the abolitionist amendment into his existing anti-abortion bill, Senate Bill 1118, which states that "A person commits murder in the first degree when that person performs an abortion," and defines abortion as "the use or prescription of any instrument, medicine, drug or any other substance, or device to intentionally kill an unborn human being." Furthermore, the bill declares that the measure is to take an immediate effect upon passage "for the preservation of the public peace, health and safety."

This bill aims to protect all children from destruction in Oklahoma, and bring Oklahoma Law into compliance with the United States Constitution. This bill unabashedly defies the Supreme Court's perversion and denunciation of the Constitutional Right to Life, and seeks to establish justice for those being deprived of life without due process of law.

The bill is set to be heard on the Senate Floor this coming coming Tuesday, March 8th.
Posted by Deacon John at 4:19 PM