Dear Deacon John,
The secular media can be very skeptical of a 40 Days for Life campaign – especially when it’s going into a new country.
That was the case in Scotland, where the media labeled 40 Days for Life as “controversial U.S. style anti-abortion campaigning.” I know it’s a mouthful, but that’s what they came up with.
However, now that 40 Days for Life has been – as promised – peacefully carried out in Scotland over the past few weeks, the media has altered their tone ... and the vigil is getting results!
I know you’ll be inspired by the leaders in Scotland, where I visited earlier in the campaign.
They have overcome much adversity ... and they share their courage and enthusiasm with me and Robert Colquhoun, our international campaign director, in this podcast episode flavored with American, English and Scottish voices.
(If you haven’t done so already, please help spread the word about the 40 Days for Life podcast by rating and reviewing it on iTunes.) 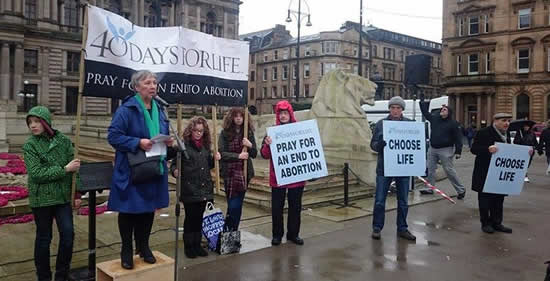 “We are gathering so many stories from people coming over to talk to us outside of the hospital,” said Rose in Glasgow. “It is very inspiring.”
This vigil takes place outside a brand new hospital that draws traffic from all parts of central Scotland.
“While it true to say that we have had the occasional aggressive comment,” she said, “we realise that behind such experiences often there is deep pain and so we continue to pray.”
One doctor told Rose that there were many conversations going on inside the hospital about 40 Days for Life. Patients looking out the window often see the volunteers praying in the cold and the rain.
“It rained practically non-stop for a full week,” she said, and people have offered them coffee, food – and even new umbrellas.
“Without exception, when we explain what the scale of the abortion crisis is in Scotland – 900 children dying each month – people are shocked and horrified,” Rose said.
“We ask them to reflect upon this information. It can truthfully be stated that 40 Days for Life in Scotland is helping to raise awareness about abortion.”
Nottingham, England 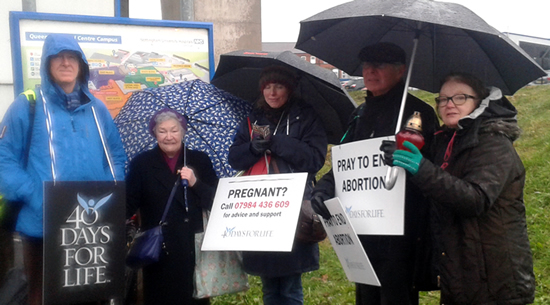 “The weather was foul,” said John in Nottingham. “Cold and very wet.”
Nonetheless, he said, a woman in her 80s arrived to pray around lunchtime. She had taken two buses from her home just to make it to the vigil – in spite of the rain – to support those who were praying on behalf of the babies.
“She needed physical support to stand with us,” John said, “but she prayed with us for an hour.”
Such signs of encouragement have become quite comforting in the wake of the verbal abuse hurled at the vigil participants – “mostly by random angry young men, unaware of the irony of using threatening language to say we are intimidating women, in front of women volunteers.”
There is also a feminist group orchestrating an online petition, complaining that the prayer teams are harassing patients, using verbal abuse, and causing vandalism. “And just in case you aren’t absolutely certain,” John added, “no, we haven’t done any of those things!”
The group received additional affirmation from a young man and woman who stopped by to talk to them – and thank them for being there.
She had been pregnant a while back and many people had tried to persuade her to have an abortion. Despite all the pressure, she had the baby.
“It was only a brief encounter,” said one of the volunteers, “but it left us smiling!”
Here's today's devotional from Carmen Pate of Alliance Ministries.
Day 21 intention Pray that we each will daily put on the full armor of God, so that we are strong in the Lord and the power of His might.
Scripture For we do not wrestle against flesh and blood, but against principalities, against powers, against the rulers of the darkness of this age, against spiritual hosts of wickedness in the heavenly places. Therefore, take up the whole armor of God, that you may be able to withstand in the evil day and having done all, to stand. — Ephesians 6:12-13
Reflection from Carmen Pate I am confounded to see how the battle over the issue of life is perceived more often in churches today as political rather than spiritual. Ironically, the enemy has used this twisted perception to silence many in the body of Christ. We must see the battle for what it is and if we are to be prepared to face the spiritual enemy on the issue of abortion, we must daily "put on" the armor God has given us: Gird your waist with Truth (vs. 14) -- Commit your emotions to believe truth and to speak truth, regardless of the repercussions. Put on the breastplate of Righteousness (vs. 14) -It will protect our hearts -- the innermost springs of our beings -- from all unrighteousness so evident in this fallen world.   Shod your feet with the preparation of the Gospel of Peace. (vs. 15) -- Preparation is vital if we are to be effective in God's work. Taking the shield of faith (vs.16) -- The Accuser will instill doubt, fear, and guilt. Faith acts as an invisible shield that deflects such false accusations. Taking the Helmet of salvation (vs.17) -- A helmet protects the head, the brain and in turn our mind and thoughts. Satan hopes we will set aside divine revelation for human reasoning. Taking the sword of the Spirit (vs.17) -- The Word of God, the only offensive weapon in this armor, was used by the Lord Jesus against Satan. The living Word is powerful and effective. Our armor is complete. We are ready to wage war, and the next verse tells us how, "Praying always with all prayer and supplication in the spirit." (vs.18)
Prayer Dear Lord, as you lead us into the spiritual battle of abortion may we be reminded that the battle is truly Yours. We thank you for equipping us with Your armor. Lead us daily to put it on! Thank you for allowing us to serve under your command, and for hearing our requests for direction and protection. Thank you for the victory that is ours because of Your Son, Jesus, Amen.
Printable devotional To download today's devotional as a formatted, printable PDF to share with friends: http://40daysforlife.com/media/day21.pdf
For life,
Posted by Deacon John at 10:40 AM