Dear Deacon John,
Today’s message is one we all would like to see for our own city!      In 273 locations right now, people are praying for an end to abortion in their communities. And God is continuing to respond. We have amazing news today about two abortion facilities where a combined tens of thousands of abortions were done. These are locations where faithful people have prayed for years … and numerous 40 Days for Life vigils were held.
Those centers – in Jacksonville, North Carolina and Augusta, Georgia – are now closed!
These are the 68th and 69th abortion facilities … where 40 Days for Life prayer vigils have taken place on the sidewalks outside … that have shut their doors forever and gone out of business.
Praise God!!!
Here are some of the details ... including the celebration in Jacksonville, where local volunteers were joined by 40 Days for Life board members Matt Britton and Tibor Baksy.
Jacksonville, North Carolina

Volunteers in Jacksonville thought they would be in for a long battle in their community.
When the local TV station did a report about the start of campaign, the owner of the abortion center where they’re praying appeared in the story … promising he would always be there for “the patients who choose to come to him.”
He had been in business for decades – and according to state health department records, almost 58,000 abortions were performed there over the years. So last month, volunteers launched their fifth 40-day vigil … praying on the sidewalk outside and serving as a witness to their city.
Not quite a week later, it was a very different story. The owner said that because of “unforeseen circumstances,” he would be closing his business.
“A miracle has happened!” said Theresa, the local 40 Days for Life coordinator in Jacksonville. The closure was totally unexpected.
At a rally outside the center after its final day in business, she told reporters, “We’re just glad the abortions are going to be over … we’re thanking God that this day has come!”
Augusta, Georgia 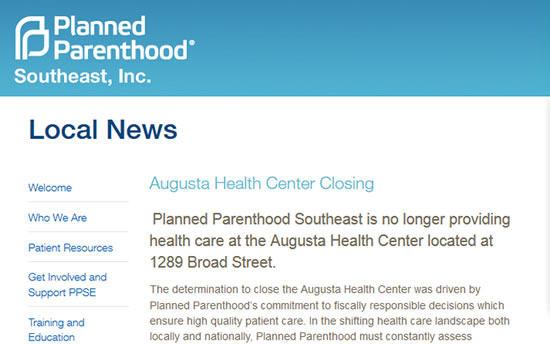 In so many words, Planned Parenthood blamed economics for the closure of its Augusta facility. It used the words “fiscally responsible decisions.”
Quite likely … they simply weren’t making enough money at that location.
People had prayed in front of this business since it opened more than 35 years ago. During that time, there were also ten 40 Days for Life vigils.
“God has answered many prayers of the Augusta people by closing Augusta Planned Parenthood,” said one Georgia volunteer. Another noted that Planned Parenthood had “long preyed on vulnerable women.”
Over the years, the facility had cut its operating hours. 40 Days for Life volunteers considered that a hopeful sign that Planned Parenthood would one day close. And now it has!
A news account of the closure explored the question of where women will receive medical care now that Planned Parenthood is gone. A representative of one medical center, which receives federal funding to help low-income patients, said it offers every single service that Planned Parenthood did, except one – abortion.
So the argument that poor women will suffer if there’s no Planned Parenthood just doesn’t hold up.
Here's today's devotional from Dennis DiMauro of Lutherans for Life.
Day 23 intention We pray for the strength to love those who do not love us.
Scripture But the Lord said "You have had pity on the plant for which you have not labored, nor made it grow, which came up in the night and perished in the night. And should I not pity Nineveh, that great city, in which are more than one hundred and twenty thousand persons who cannot discern between their right hand and their left, and much livestock? Should I not be concerned about that great city?" — Jonah 4:10-11
Reflection from Dennis DiMauro
God doesn't value people and things like we do. Jonah loved a shade tree more than an entire city of sinful people. We love our dogs more than a terrorist. We love our cars more than a beggar on the side of the road. And sometimes, we love our money more than a child growing in a desperate teenager's womb. But God isn't like us. Genesis 1 tells us that humans were the capstone of God's creation. We were created on the sixth day after God had completed the land, the stars, the plants and the animals. Therefore, His love for us is greater than His love for a plant, an animal, or any other created thing. And the book of Jonah tells us that He loves even the most sinful people and seeks to bring them into His merciful arms. And it's a love that seeks to touch all of his created children: that desperate teenager, the baby growing in her womb, even tyrants and terrorists. So it's up to us to imitate God's merciful love by helping and praying for those who persecute us, and those who don't love us back.
Prayer Gracious God, loving our enemies seems like one of most difficult things you could ask of us. Please remind us that this is how you love and that if you ask it of us then you will give us the grace to do it. This we ask through Christ our Lord, Amen.
Printable devotional To download today's devotional as a formatted, printable PDF to share with friends: http://40daysforlife.com/media/day23.pdf
For life,
Posted by Deacon John at 10:09 AM