Dear Deacon John,
It’s the final week of this 40 Days for Life campaign!
So far, our local leaders report that they know of …
… 351 babies (and their moms) spared from abortion since we started on February 10!
Have you prayed at a vigil yet? If not, it’s not too late! You have a week left ... and God could just use you to save a life!
There are 273 locations ... so find the one nearest you!
Cleveland, Ohio

John, the local leader in Cleveland, says you never know what’s going to happen when you go pray at a 40 Days for Life vigil.
He tells of two volunteers who’d never prayed outside the abortion center before … who were there to witness when two young women chose life for their children.
Shortly after arriving, they watched as a truck pulled out of the parking lot … and stopped right next to the prayer volunteers. The woman inside told them she had changed her mind about abortion.
About an hour later, one of the volunteers walked up to a car to give the couple inside information about community resources. They told her they had one child … and were keeping this baby.
John’s simple response? “Praise God, praise God, praise God!”
Louisville, Kentucky 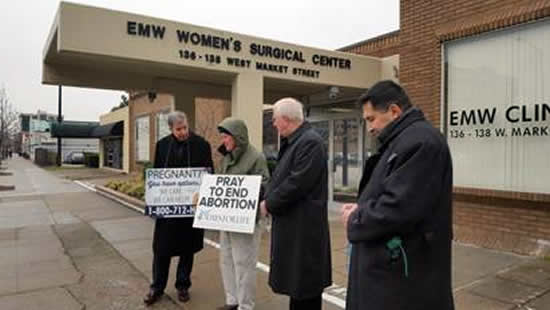 “You’ve heard the phrase ‘God’s timing is perfect,’” said Laura, the Louisville coordinator. “Well today, God’s timing was absolutely perfect!”
Just as Archbishop Joseph Kurtz arrived to lead prayer at the 40 Days for Life vigil, one of the prayer volunteers noticed a woman had come out of the abortion center.
She had tears in her eyes … and told the vigil participants that “she couldn’t go through with it” and was keeping her baby. She accepted information about the pregnancy help center … thanked the volunteers … and drove away.
“Archbishop Kurtz and the other 40 Days for Life volunteers prayed for this mother and her unborn child,” Laura said, “and gave thanks for the gift of the life that was saved. We are asking for your continued prayers for the protection of the unborn, this mother and her child, and the many mothers and fathers that need help in an unplanned pregnancy.”
Melbourne, Australia
Fons, the local leader in Melbourne, tells of a suburban couple that arrived at the “fertility control centre” where 40 Days for Life volunteers pray outside.
“They had already two children,” he said, “a toddler and a small baby. And now she discovered that she is pregnant with twins. She did not know how they were going to cope.”
But she knew what she was about to do was wrong. “She broke down crying at the gate, where one of our committee members was able to speak with her and reassure her and offer support,” Fons said.
The father had said he would go along with his wife either way. But one of the volunteers reminded him that she needed his support to have the babies.
Here’s today’s devotional from Rev. Paul Stallsworth, President of Lifewatch (United Methodist Church).
Day 34 intention May we come to know that divine life, in relationship, creates human life.
Scripture In the beginning was the Word, and the Word was with God, and the Word was God. He was in the beginning with God. All things were made through Him, and without Him nothing was made that was made. —John 1:1-3
Reflection from Rev. Paul Stallsworth “In the beginning” was God. Always, before all times, there was God. This particular God – the God of the Bible, the God of St. John’s Gospel – is different from all other gods. This God is alive and full of life. This God is not the picture of deadness and death, aloneness and isolation. This God is the picture of life, relationship, and unity. For within this God, within this one God, there are three divine persons who live, who love, and who work – together. This is the glorious mystery of the Trinity. The Trinity means divine life. The Trinity means three, living Persons – Father, Son, and Holy Spirit – who relate to each other. The Trinity means mutual love and service among three Persons. The Word was always with God the Father. This Word was, is, and will be the Trinity’s second person. The Word is also the Son of God or, as revealed in time, Jesus Christ. God the Father and God the Son live, love, and work for each other. As one, they create “all things” together: the Father creates all things, including all human life, through the Son. So the Father, through the Son, creates all human lives. The little one swimming in his mother’s womb, the infant smiling in his father’s arms, the child crying in pain in a hospital bed, the energetic teen running another mile, the old man gasping for his last breath – all were created, at their beginning, by the Father through the Son. No exceptions. Divine life creates human life.
Prayer O God, may we always be quick to call you Father. And when we call you father, let your Spirit remind us that we, and all people, from their beginning to their last day, are your children. We praise you, Father, that you sent your Son to reveal to the world that all people are His brothers and sisters, that all people are your children. Through Jesus Christ we pray, Amen.
Printable devotional To download today’s devotional as a printable PDF to share with friends: http://40daysforlife.com/media/day34.pdf
For life,
Posted by Deacon John at 10:42 AM