From 40 Days For Life: DAY 35: Does your hospital do abortions?

Dear Deacon John,
Does your hospital do abortions?
It’s a hard question to ask ... and it can be even harder to answer. While it’s true that most abortions in the United States take place at freestanding facilities, there are also hospitals where abortions are done. In the newest episode of the 40 Days for Life podcast, I welcome two men who’ve successfully opposed hospitals involved with abortion – Brian Gibson of Pro-Life Action Ministries and Steve Karlen, our 40 Days for Life North American campaign director. Our discussion covers finding out if your hospital does abortions ... what difference you can make if it does ... and what convinces hospitals to stop.
Here’s the link to this episode:
https://40daysforlife.com/2016/03/15/podcast-11/
In other countries, many abortions take place in hospitals. But that has not deterred the prayers – or the success – of faithful Christians in those nations.
Here are two examples:
Wellington, New Zealand 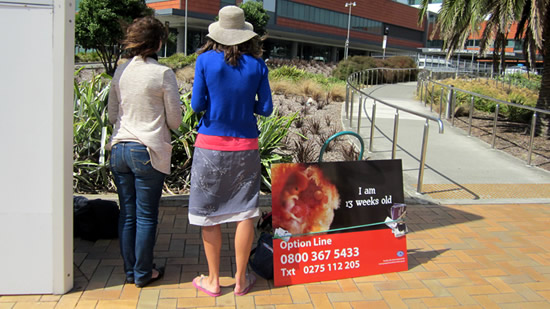 “Abortions are done in our public hospital,” said Clare, the 40 Days for Life leader in Wellington.
The women are told to use an entrance that is away from the vigil. “We have never had the opportunity to sidewalk counsel,” she said. “We do get interactions with the public though.”
Volunteers held a large sign with a picture of the preborn baby and the words “I am 13 weeks.” Several passersby had comments such as “that’s wrong” and “that’s a fake picture.”
But one young woman approached and showed them an ultrasound image. Her baby was at 12 weeks, Clare said, “and she couldn’t get over the similarity with the one on our sign.”
She had been told her baby resembled a pea at this stage of pregnancy and she was toying with the idea of abortion, mainly to please her parents. But after seeing the scan, she decided to keep her baby.
“It seemed as if God had us there with that particular picture to confirm her decision,” Clare said.
Zagreb, Croatia 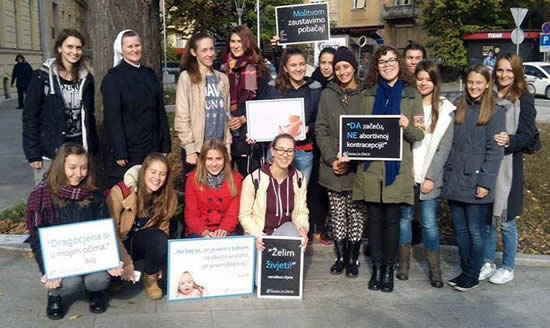 The 40 Days for Life vigils in Croatia typically take place near hospitals, as that’s where most of the abortions are done.
Petra, one of the leaders, says there has been some negative reaction to the vigils, “but we must be in front of hospitals for women in need.” They’re aware of women who were planning to have abortions who are now having second thoughts.
The team is most encouraged by one group of high school girls who’ve been praying weekly at the 40 Days for Life vigils in each of the Zagreb campaigns. “They are young, nice and beautiful, and they are the pro-life generation.”
Petra also noted the growth of other Croatian campaigns. In Sisak, the vigil has expanded. “They are really devoted, and they raised number of people praying in front of the hospital.”
In Slavonski Brod, the team has added nighttime vigils. Petra is particularly impressed with Lucija, “one of our youngest volunteers, who is leading prayers when she is in front of hospitals with her parents. And she is just 10 years old!”
Here’s todays devotional from Carmen Pate of Alliance Ministries.
Day 35 intention Pray for post-abortive women who cannot forgive themselves; may they understand that there is no condemnation for those who are in Christ Jesus.
Scripture Blessed are those whose lawless deeds are forgiven, and whose sin is covered. Blessed is the one to whom the Lord shall not impute sin. — Romans 4:7-8
Reflection from Carmen Pate In the passage above, the Apostle Paul making a point about justification by faith, refers back to David’s words in Psalm 32:1-2. In spite of the enormity of David's sin — adultery with Bathsheba and his murder of her husband — and the utter absence of any personal merit, David in his brokenness, understood the imputed righteousness of God. David’s response was not continued guilt over his sins, but praise for his freedom from guilt, and God's power to live life differently. Once your relationship with God has been restored, your guilt has served its purpose and should no longer be given place in your life. This is true regardless of the sin, including the sin of abortion. As a post-abortive woman, I too struggled with this issue until I realized that punishing and hating myself after receiving God's forgiveness was an insult to God. It was as though I were minimizing Christ's work on the cross as insufficient to cover my sin. I was denying Him the opportunity to bring glory to His name for the healing and restoration He wanted to do in my life. I was giving victory to the enemy who having lost the battle for my soul, was bent on destroying my testimony as I accepted the continual guilt he heaped on my mind. It is my joy to continually sing of God’s grace rather than give the devil a foothold in my life. Don't waste God’s mercy! Accept His forgiveness and forgive yourself as testimony of His amazing grace.
Prayer Our Most Gracious Heavenly Father, thank you for your amazing grace that saved a wretch like me. I come against the enemy of my soul who would have me feel cast down and dejected. Lord, keep your children from falling prey to the accusations of the father of lies. Turn our mourning into dancing and may we bring praise to you as we give testimony of Your healing and restoration in our lives. For by His grace we are saved, Amen.
Printable devotional To download today’s devotional as a formatted, printable PDF to share with friends: http://40daysforlife.com/media/day35.pdf
For life,
My Comment: I remember back in the 1970's, some hospitals were the first to kill babies through so-called 'legal abortion!' My wife and I picketed one in Long Island, and it was the start of a long career (40 years) of praying at abortion mills. May Almighty God put an end to the killing of the unborn! Amen.
Deacon John
Posted by Deacon John at 11:42 AM