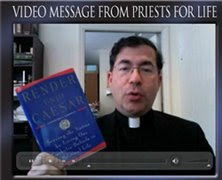 “What needs to be done by Catholics today for their country? The answer is: Don’t lie. If we say we’re Catholic, we need to prove it” (p.197)

That is the kind of refreshing directness and clarity that you find throughout Archbishop Charles Chaput’s new book, Render Unto Caesar. The book is excellent preparation for our upcoming elections. It outlines why Catholics have to be actively engaged in the process precisely as Catholics, not in spite of being Catholics. Moreover, the book is essential reading throughout the year, because it outlines the key challenges the Church faces today in her public life, and the key solutions.

The book’s title recalls the passage in Matthew 22 when Jesus is asked whether it is lawful to pay tax to the emperor. “Render unto Caesar what is Caesar’s,” he replies, “and to God what is God’s.” The coin belongs to Caesar because it bears Caesar’s image. Humanity itself belongs to God because it bear’s God’s image – and that includes Caesar himself. In other words, Caesar also has One whom he must obey.

That Gospel account sets the framework for this new book. Faithful Christians are called to be – and must be – faithful citizens. Using historical examples, Church teaching, and clear reasoning, Archbishop Chaput shows that the great experiment of American democracy was never meant to exclude religion, and that Catholicism is not incompatible with life in the American system of government.

The book is aptly subtitled, “Serving the Nation by Living our Catholic Beliefs in Political Life.” The assertion is that robust and unapologetic adherence to and promotion of Catholicism in a public way – even in political life – serves the nation. It does not subvert the nation, or seek to erase the legitimate autonomy of secular institutions. Nor does it hide behind those institutions. When Catholic citizens live their Catholicism vigorously, service to the nation is both a motivation and an effect. Archbishop Chaput explains,

“American democracy does not ask its citizens to put aside their deeply held moral and religious beliefs for the sake of public policy. In fact, it requires exactly the opposite. People are fallible. The majority of voters can be uninformed or biased or simply wrong. Thus, to survive, American democracy depends on people of character fighting for their beliefs in the public square – legally, ethically, and nonviolently, but forcefully and without apology. Anything less is a form of theft from the nation’s health” (p.146-147).

Drawing from history involving Constantine and St. Thomas More, Vatican II and John Courtney Murray, Cardinal Joseph Ratzinger (now Pope Benedict XVI) and various politicians whose reputation could have been better with the Church, Archbishop Chaput presents not an academic analysis, but rather a pastoral appeal which is academically sound, heartfelt, and deeply needed at this point in the history of the Church in America. “The point is this,” he asserts, “American Catholics now face a crisis of faith, mission, and leadership – and the task of fixing it falls equally on Catholic laypeople and their bishops” (p.182).

Click here for more quotes from Render Unto Caesar

This column can be found online at www.priestsforlife.org/columns/columns2008/08-09-08-render-unto-caesar.htm