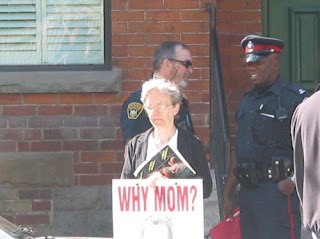 TORONTO, September 25, 2008 (LifeSiteNews.com) - The second part of the trial of Linda Gibbons for protesting outside a Toronto abortion center took place Tuesday at College Park Court with pro-life supporters in attendance to encourage her.  The trial took most of the day and the judge is to render his decision in the case next Tuesday, September 30 at 2:30pm.

Talking to Show the Truth leader Rosemary Connell from prison on Sunday, Gibbons noted that a piece of pro-life literature sent to her in a letter saved a baby's life. "Linda said women will often sit down with her as she opens her mail," Connell told LifeSiteNews.com. "A woman watching her one day last week saw the pamphlet and told Linda that she was pregnant and planning an abortion because 'the CAS would take the child anyway'."

Connell concluded, "Linda talked to her and gave her the pamphlet. The next morning she told Linda that she had changed her mind and is letting the baby live"