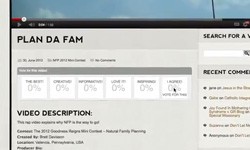 Voting for Favorite Video Now Open to the Public

Public voting ends July 22 and the People’s Choice winner will be announced the following day in conjunction with the U.S. bishops' annual Natural Family Planning Awareness Week. Following this voting period all videos will remain online indefinitely to serve as teaching tools for catechists, teachers and individuals.

"All-around (Leah’s) was a fantastic video. The format, music, dialogue and emotion were all stellar," remarked judge Brandon Vogt, author of "The Church and New Media: Blogging Converts, Online Activists, and Bishops who Tweet." Judging criteria evaluated each video's impact, its appeal to a young adult audience as well as its technical merits.

Other judges were: Damon C. Owens, executive director of The Theology of the Body Institute; Jessica M. H. Smith, speaker and blogger of NFP Works, part of The Edith Stein Foundation; and Greg and Jennifer Willits, co-hosts of Sirius XM’s program “The Catholics Next Door.” They are also authors of a book by the same title.

Leah, a resident of Binghamton, N.Y., has a popular YouTube channel called "She is Catholic." She will receive her choice of either a Panasonic camera or a $1,000 gift card from B&H Photo.

The Mini Contest is a new offering from Goodness Reigns, which orchestrated an international video contest that brought together many young amateur filmmakers from the United States, India and Mexico for World Youth Day 2011 in Madrid, Spain. A similar contest will be launched in 2012 leading up to WYD 2013 in Brazil.