Mothers, Never Stop Praying For Your Husbands And Children 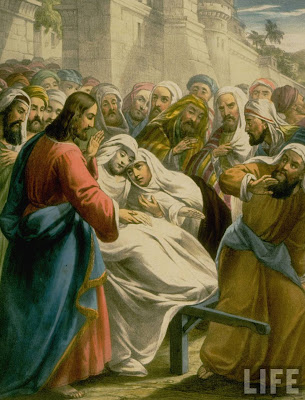 The Bible says Jesus had compassion when He saw her and immediately raised her boy from the dead. (Luke 7:12-15). It was the cry of a mother that moved the Heart of God.
Still, today, Mothers who cry before the Lord for their families, for their marriages, for their homes move the Heart of God. When Mothers stop praying, their families (especially their children) perish. Satan gets a foothold and starts to destroy the home, yet when they return to their rightful place as the anchor of the home, demonic strongholds get demolished. Statue of (a) mother at the Yasukuni shrine, dedicated to those mothers who lost their husbands in the war but suceeded in raising their children anyway. Erected in 1974. (Photo credit: Wikipedia)

In Psalms 17, 36, 57, 63, and 91 God's role is likened to that of a Mother. As a Mother protects, upholds and defends her children, so also does God protect us under the shadow of His Wings. We find refuge there and can hide there until the danger is over. A mother's role is so vital that a father cannot get his prayers answered if he dishonors or disrespects her (I Peter 3:7). Because of this favor over mothers, they are also the most attacked persons in the home. The devil is terrified of Mothers (the powerhouse in the home). Yet the Lord has put grace and resilience inside Mothers to overcome any situation.
Today, as the woman of the home, consider yourself blessed. Consider yourself highly favored and consider yourself dangerous when you pray.
I urge all mothers to pass this on to mothers you know!
Be Blessed+
[From January Issue of Garabandal International Magazine]
Posted by Deacon John at 1:20 PM