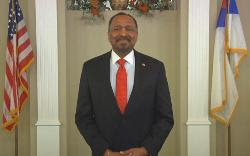 Taking his message across the country, particularly into battleground states with significant black voting populations - including North Carolina and Arkansas - the Bishop points to incidents involving "attacks on Christians and their First Amendment rights."  Democrat Mayor Annise Parker subpoenaed the sermons and speeches of Pastors who opposed a recent gender identity ordinance. They faced the threat of court fines and imprisonment for refusal to comply. Democratic led city of Coeur D'Alene, Idaho threatened a Christian husband and wife who own a Chapel with a lawsuit, fines up to $1,000 per day and six months in jail for refusing to perform same-sex weddings.

Christian business owners have been harassed and fined for refusing to provide photography services or bake a "wedding" cake or provide a "marriage" floral arrangement for same sex ceremonies. Christian Military personnel have faced forced discharge for refusing to endorse same sex relationships. Christians have been fired from their jobs or refused employment for opposition to same sex marriage.

"Christians are under attack by radical gay activists and their Democrat allies," says Bishop Jackson. "We will love and forgive, but we will not be silent. No Christian, and this certainly includes Black Christians, should vote for candidates or a Party that attacks their Pastor, their church, their faith and the right to practice it. Black Christians must stop supporting the Democrat Party which has become anti-Christian, anti-life and anti-religious and anti-civil rights."

Bishop Jackson will join with other Christian groups on ISTAND Sunday, November 2nd, at Grace Community Church in Houston to support the Pastors under attack by the city's first openly lesbian Mayor. He is also circulating a nationwide Unity Petition for Religious and Civil Rights to bring Christians together across racial, cultural and denominational lines in defense of their First Amendment rights.

E.W. Jackson is a Bishop, Marine Corps Veteran, graduate of Harvard Law School and 2013 Republican Nominee for Lt. Governor of Virginia. He is the Founder and President of STAND. www.standamerica.us

Newport News Daily Press ran a story on this release in today's edition:
www.dailypress.com/news/politics/shad-plank-blog/dp-virginia-politics-ew-jackson-says-democrats-attack-christian-values-with-antidiscrimination-laws-abo-20141029-post.html
Posted by Deacon John at 4:57 PM