Dear Deacon John,
Some moms who have chosen life at the very last moment say that when they woke up on the morning of their abortion appointment, they asked God to give them a sign that they should not have the abortion. In most cases, a woman will ask for this sign in her prayers. In one instance, though, the mother saw the sign in her dreams! The 40 Days for Life campaign in Flint, Michigan had been praying for a baby to be saved from abortion. But it didn't happen — until one mom’s dream literally came true!
Flint, Michigan

Teresa was praying in front of the abortion center on a very quiet day. “I wasn't really paying attention when a car pulled up next to me,” she said. The woman in the car told Teresa that a week before, she had scheduled an abortion … and made a payment. “She was feeling very conflicted but knew her financial situation would not support another child.” But then, the woman said, the day before the abortion, she had a dream – “joyful faces and helpful signs standing and welcoming her.” But still, she was determined to keep her appointment. She arrived during the campaign’s midpoint rally. “She saw her dream as reality,” Teresa said, “and our joyful, peaceful, prayerful faces and encouraging signs changed her mind! I feel so blessed to have had this amazing experience.”
White Plains, New York 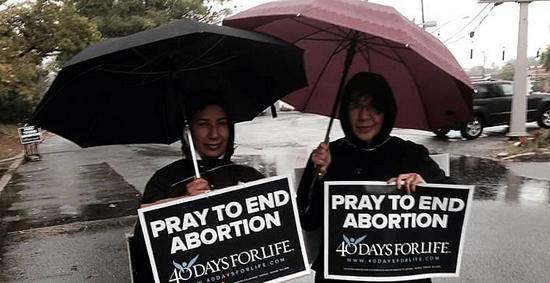 “Praise God!” said Gerald in White Plans. “Every once in a while He works a miracle to strengthen our faith and validate our efforts.” Early one morning, a young couple drove up to the abortion center – and sat in the car for about 20 minutes. Eventually, the man walked around to the other side of the car and tried to convince the woman to get out. But she didn’t budge. He finally gave up, got back into the car and drove away … only to turn right around and come back. The same scene repeated, as the young man tried his best to get the woman out of the car and into the abortion center. All this time, volunteers continued to quietly pray. Finally, the man gave up again and drove away – “this time for good,” Gerald said. “The young lady never got out of the car.”
Atlanta, Georgia The 40 Days for Life team in Atlanta sent two quick, encouraging stories. One of the volunteers spoke to a man who brought a young woman to the abortion center … pleading with that man to go inside and get her out. And he did! The woman seemed overjoyed when they left together. A second woman arriving for an appointment told prayer volunteers she was there for an RU-486 abortion … and the facility’s staff told her that at five weeks, the baby was “just a clump of blood.” But when she saw everyone praying, “she knew this was not a good place. She did not go in!” One of the other vigil participants said, “We give thanks to God for His powerful hand at work!” Here’s today’s devotional from Fr. Frank Pavone, national director of Priests for Life.
Day 30 intention  That those tempted to abort may understand that their child is already present, and already a real person.
Scripture And it happened, when Elizabeth heard the greeting of Mary that the babe leaped in her womb; and Elizabeth was filled with the Holy Spirit. Then she spoke out with a loud voice and said, “Blessed are you among women, and blessed is the fruit of your womb! But why is this granted to me, that the mother of my Lord should come to me? For indeed, as soon as the voice of your greeting sounded in my ears, the babe leaped in my womb for joy.” — Luke 1:41-44
Reflection
Jesus not only loves unborn children — He was one himself! Think about this for a moment. We often hear people speak of a pregnant mother by saying, “She’s expecting a child.” Now if one is expecting a package, the package is not yet there. As reflected in our verse for today, however, this is not the case with the mother. Her gift is already there. The pregnant woman, a mother already, does not have a child “on the way,” but has a child, already present and in full possession of his or her human rights, starting with the right to life.
Prayer Jesus, open my eyes to your presence in the life of every child. Open my heart to joy in the birth of every child, a birth that reflects the joy of your own birth in Bethlehem. As you shared life in the womb of Mary, so now send your protection upon every child still in the womb, and grant to their mothers the strength and joy that comes from welcoming the gift of life. We pray through Christ our Lord, Amen.
Printable devotional
To download today’s devotional as a printable PDF to share with friends:
http://40daysforlife.com/media/fall2014day30print.pdf
For Life,