Dear Deacon John,
With a week to go in this 40 Days for Life campaign, more and more reports of blessings are coming in from 297 vigils in 11 countries. So far … we are aware of 409 babies whose lives have been spared from abortion! Here’s some good news to start your week.
Winston-Salem, North Carolina

“We are happy to report our first saved baby that we know of here in Winston-Salem,” said Toni, the local coordinator. Volunteers were able to talk to a young couple on their way into Planned Parenthood. They offered them information about life-affirming options and contact information for two pregnancy help centers in the area that would love to assist. The couple listened, said thanks, then went into Planned Parenthood. Within about five minutes, though, they came right back out. “The young lady smiled and waved as they got in the car and drove away,” Toni said. “As they passed us, they were clearly smiling.” It was welcome news, since it had been a rough day for vigil participants. First of all, two women drove by and angrily gestured at them. Then a man driving away from a nearby medical office yelled at them, “You are bad people!” In retrospect, Toni said, “We believe the devil was riled because a life was about to be saved!”
Buffalo, New York 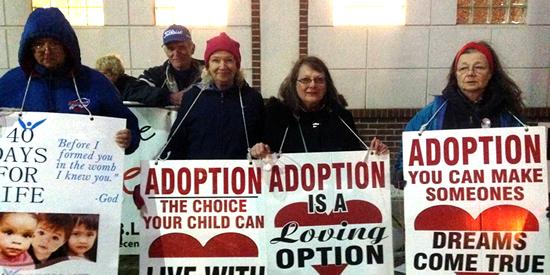 A volunteer praying at the 40 Days for Life vigil for the first time ever got to witness a special moment. Two women left the abortion center and walked over to the people who were in prayer. One of the women held out a sonogram image for them to see as she proudly announced, “I’m keeping my baby!” As she walked away, she told the volunteers, “Keep on doing what you’re doing!” Later that same day, people were praying when a couple went into the abortion facility. Not long afterward, the man came out and told the vigil participants that his wife wanted the abortion … but he did not. She soon followed her husband out of the building, and they left without having the abortion. Cherry Hill, New Jersey Volunteers at the vigil in Cherry Hill watched as a woman left the abortion center. She met an older woman and a little boy outside ... and they all walked to a car. After a few minutes, though, the younger woman walked back to the building. She spoke to someone at the door, but did not go inside. The woman then turned to the vigil participants and asked for help. Her battery had died, and she couldn’t start her car. The volunteers soon found out that the young woman was pregnant. The older woman was her mother, and the boy was her 3-year-old son. She had come for an abortion – but left the building because she simply couldn’t go through with it. Her mother said she took the car trouble as a sign they should have never scheduled the abortion to begin with. As they left (they did eventually get the car started), she told the volunteers, “You won’t be seeing us again!” Here’s today’s devotional from Rev. Paul Stallsworth, President of Lifewatch (United Methodist Church).
Day 34 intention May we come to know that divine life, in relationship, creates human life.
Scripture In the beginning was the Word, and the Word was with God, and the Word was God. He was in the beginning with God. All things were made through Him, and without Him nothing was made that was made. —John 1:1-3
Reflection “In the beginning” was God. Always, before all times, there was God. This particular God – the God of the Bible, the God of St. John’s Gospel – is different from all other gods. This God is alive and full of life. This God is not the picture of deadness and death, aloneness and isolation. This God is the picture of life, relationship, and unity. For within this God, within this one God, there are three divine persons who live, who love, and who work – together. This is the glorious mystery of the Trinity. The Trinity means divine life. The Trinity means three, living Persons – Father, Son, and Holy Spirit – who relate to each other. The Trinity means mutual love and service among three Persons. The Word was always with God the Father. This Word was, is, and will be the Trinity’s second person. The Word is also the Son of God or, as revealed in time, Jesus Christ. God the Father and God the Son live, love, and work for each other. As one, they create “all things” together: the Father creates all things, including all human life, through the Son. So the Father, through the Son, creates all human lives. The little one swimming in his mother’s womb, the infant smiling in his father’s arms, the child crying in pain in a hospital bed, the energetic teen running another mile, the old man gasping for his last breath – all were created, at their beginning, by the Father through the Son. No exceptions. Divine life creates human life.
Prayer O God, may we always be quick to call you Father. And when we call you father, let your Spirit remind us that we, and all people, from their beginning to their last day, are your children. We praise you, Father, that you sent your Son to reveal to the world that all people are His brothers and sisters, that all people are your children. Through Jesus Christ we pray, Amen.
Printable devotional To download today’s devotional as a printable PDF to share with friends: http://40daysforlife.com/media/fall2014day34print.pdf
For Life,
Posted by Deacon John at 10:29 AM