Dear Deacon John,
40 Days for Life is a grassroots effort. Even as the campaign continues to grow, our headquarters team tries to visit as many 40 Days for Life locations as possible. It’s important for us to meet with you, and your fellow volunteers, at your prayerful vigil. With 297 cities in 11 countries conducting 40 Days for Life campaigns right now, it’s not humanly possible to get to every location ... but one man seems to be making a run for it: Robert Colquhoun. Robert is our London-based international outreach director ... and he is on a 40 Days for Life world tour — literally! As the man who brought the first 40 Days for Life vigil to Great Britain a few years back, Robert knows what it takes to lead a campaign and overcome difficult challenges and persecution. He also knows what it’s like to meet a baby who was about to be aborted. During this campaign, Robert will be visiting Africa, Australia, South America and Europe ... so look for more updates from him over these next few weeks.
Ghana, Nigeria and South Africa Watch Robert’s inspiring five-minute video report ... straight from the 40 Days for Life front lines in Africa: 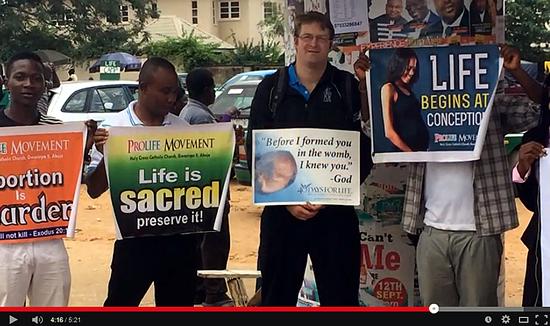 Click the image above or go to: http://40daysforlife.com/2014/10/16/40-days-life-africa/
There are currently six campaigns underway in Africa, and Robert was able to meet with 40 Days for Life leaders there and visit several of the locations. The culture differs greatly from North America or Europe, and the legal landscape varies in each country as well. But in each location, the need for life-affirming outreach is clear ... and, as you'll see in the video, lives are being saved!
Riga, Latvia 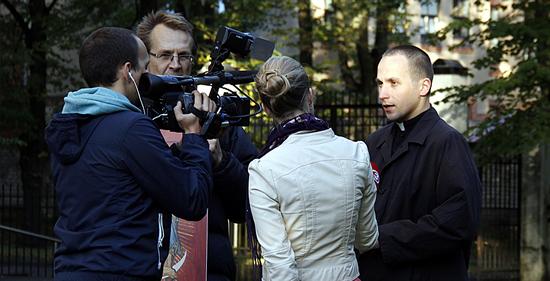 The first 40 Days for Life effort in Latvia’s capital city is getting attention from the people – and the media. “One of the biggest newspapers published a story about our activities,” said Janis, the leader in Riga, “and more mass media interest was created by that newspaper article.” One TV station interviewed Janis and Fr. Aivars Licis, a priest who’s been helping with the campaign. That’s Janis who is partially hidden by the cameraman in the photo. “It gave us an opportunity to explain our position on abortion,” he said. Volunteers conducted a prayer walk from St. Albert Church, which is close to the hospital. They walked around the hospital fence and returned to the church for prayer in the Garden of Souls. “That’s a small monument in our church garden dedicated to aborted and miscarried children,” Janis explained He said the 40 Days for Life devotionals, which have been translated into Latvian, are especially popular. There’s a group that prays with the devotionals in church each morning. “Another friend told me he was downloading the devotionals and praying at home." Here's today's devotional from Dennis DiMauro of Lutherans for Life.
Day 23 intention We pray for the strength to love those who do not love us.
Scripture But the Lord said "You have had pity on the plant for which you have not labored, nor made it grow, which came up in the night and perished in the night. And should I not pity Nineveh, that great city, in which are more than one hundred and twenty thousand persons who cannot discern between their right hand and their left, and much livestock? Should I not be concerned about that great city?" — Jonah 4:10-11
Reflection God doesn't value people and things like we do. Jonah loved a shade tree more than an entire city of sinful people. We love our dogs more than a terrorist. We love our cars more than a beggar on the side of the road. And sometimes, we love our money more than a child growing in a desperate teenager's womb. But God isn't like us. Genesis 1 tells us that humans were the capstone of God's creation. We were created on the sixth day after God had completed the land, the stars, the plants and the animals. Therefore, His love for us is greater than His love for a plant, an animal, or any other created thing. And the book of Jonah tells us that He loves even the most sinful people and seeks to bring them into His merciful arms. And it's a love that seeks to touch all of his created children: that desperate teenager, the baby growing in her womb, even tyrants and terrorists. So it's up to us to imitate God's merciful love by helping and praying for those who persecute us, and those who don't love us back.
Prayer Gracious God, loving our enemies seems like one of most difficult things you could ask of us. Please remind us that this is how you love and that if you ask it of us then you will give us the grace to do it. This we ask through Christ our Lord, Amen.
Printable devotional To download today's devotional as a formatted, printable PDF to share with friends: http://40daysforlife.com/media/fall2014day23print.pdf
For Life,
Posted by Deacon John at 10:50 AM