From 40 Days For Life: DAY 35: The first abortion facility

Dear Deacon John,
We never know how God will plant seeds. That hit me during a recent visit to the 40 Days for Life campaign in Syracuse, New York. We just need to answer His call and be there! It starting to get cold in Syracuse … but that hasn’t stopped the leaders there, as they have seen 50 moms choose life at the last moment during all of their campaigns so far.
Syracuse, New York

There have been two babies spared from abortion in Syracuse during this campaign – at a vigil that’s taking place in front of the first-ever Planned Parenthood abortion facility. “This is the mother ship for Planned Parenthood and we are not going away anytime soon,” said Shannon, the local coordinator. The fruit in Syracuse has gone beyond the sidewalk and birthed two new ministries in the region ... all because of volunteers who were inspired to do more after participating in 40 Days for Life. One ministry, Ten Good Men, challenges men to stand up to the culture with prayer and leadership. The other, St. Joseph’s Home, is a newly-opened maternity home for homeless moms that was started by the volunteer directly to the left of me in this photo: 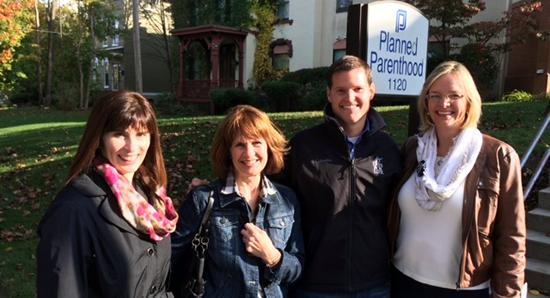 The other women are the 40 Days for Life leaders who continue to pray at the place where Planned Parenthood began to build the largest abortion chain in America. What an inspiration to see how God has used these faithful women! They are an example to all of us.
Canton, Ohio One of the qualities you need to bring to the vigil is perseverance. There can be long hours on the sidewalk. The people inside the abortion center just wish you’d go home. People passing by may say things. But often, they just ignore you. “One woman did take our information,” said Linda, the local leader in Canton, “but none of the others would even look our way.” Of course, there are some that do pay attention – but not always in a positive manner. A driver offered a rude gesture and screamed, “You are a religious zealot!” Linda’s response? “I thanked him.” Another volunteer said a man pulled up, rolled down his window, and wagged his finger at him – “like school teachers used to do” – and yelled out, “Shame on you! Go home! You have no idea what you are doing! Shame on you!” Thankfully, there are positive signs as well. “Two men brought us coffee and I got a fist bump from a young man with earphones on,” Linda said. “He had a big smile and a head nod.” As the campaign enters its final days, Linda expressed her appreciation. “All of you that are praying and fasting at home please know your prayers are what is keeping the campaign going. If you are able and have not taken time to pray at Planned Parenthood, please consider helping by being a visible sign to the community.” Here’s todays devotional from Carmen Pate of Alliance Ministries.
Day 35 intention Pray for post-abortive women who cannot forgive themselves; may they understand that there is no condemnation for those who are in Christ Jesus.
Scripture Blessed are those whose lawless deeds are forgiven, and whose sin is covered. Blessed is the one to whom the Lord shall not impute sin. — Romans 4:7-8
Reflection In the passage above, the Apostle Paul making a point about justification by faith, refers back to David’s words in Psalm 32:1-2. In spite of the enormity of David's sin — adultery with Bathsheba and his murder of her husband — and the utter absence of any personal merit, David in his brokenness, understood the imputed righteousness of God. David’s response was not continued guilt over his sins, but praise for his freedom from guilt, and God's power to live life differently. Once your relationship with God has been restored, your guilt has served its purpose and should no longer be given place in your life. This is true regardless of the sin, including the sin of abortion. As a post-abortive woman, I too struggled with this issue until I realized that punishing and hating myself after receiving God's forgiveness was an insult to God. It was as though I were minimizing Christ's work on the cross as insufficient to cover my sin. I was denying Him the opportunity to bring glory to His name for the healing and restoration He wanted to do in my life. I was giving victory to the enemy who having lost the battle for my soul, was bent on destroying my testimony as I accepted the continual guilt he heaped on my mind. It is my joy to continually sing of God’s grace rather than give the devil a foothold in my life. Don't waste God’s mercy! Accept His forgiveness and forgive yourself as testimony of His amazing grace.
Prayer Our Most Gracious Heavenly Father, thank you for your amazing grace that saved a wretch like me. I come against the enemy of my soul who would have me feel cast down and dejected. Lord, keep your children from falling prey to the accusations of the father of lies. Turn our mourning into dancing and may we bring praise to you as we give testimony of Your healing and restoration in our lives. For by His grace we are saved, Amen.
Printable devotional To download today’s devotional as a formatted, printable PDF to share with friends: http://40daysforlife.com/media/fall2014day35print.pdf
For Life,
Posted by Deacon John at 12:12 PM