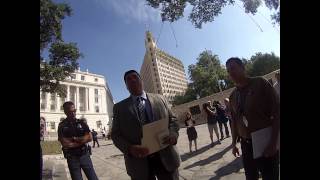 Contact Mark Harrington, Created Equal, 614-419-9000, mark@createdequal.net
COLUMBUS, Ohio, Oct. 27, 2014 /Christian Newswire/ - On October 22, 2014 the City of San Antonio reneged on a permit approved for the display of a Jumbotron that would have shown abortions at the Alamo. During the almost five hours of the stand-off city officials stonewalled, evaded, and provided contradictory answers to questions asked by Mark Harrington of Created Equal (the permit holder).
·         WATCH: Stand-off at Alamo.
City officials claimed that Created Equal's Jumbotron violated city sign code regarding digital signs, but on Saturday the city admitted they selectively enforced a sign ordinance for the purpose of denying our first amendment right to free expression (see Oct 24, 2014 Express article entitled, City acknowledges 'Jumbotron' ordinance existed but wasn't previously enforced). This was a clear cut case of content-based discrimination.
This was about abortion, not sign compliance. Once the City of San Antonio bureaucrats found out that we had an approved permit to display the Jumbotron they searched the city code to find a way to stop us. If someone had wanted to perform an abortion at Alamo Plaza they would have protected their right to do so. But since we were going to show an abortion they did all they could to stop us.
"Just as the battle of the Alamo was lost but Texas' independence from Mexico was eventually won, we may have lost the first round of the battle to show the victims of abortion but we will regroup. We will evaluate our legal options. This battle is far from over. We are not going away. If city leaders think they got rid of us they have another thing coming. We will 'remember the Alamo.'" -- Mark Harrington, National Director, Created Equal
Posted by Deacon John at 10:39 AM