Dear Deacon John,
Abortion facilities try their best to nestle into a community and go unnoticed.
Sometimes, they look like ordinary buildings in an otherwise good neighborhood. Other times, however, they look like the grotesque places they really are.   When you see a shady-looking abortion facility — and then add the element of people praying out front — even someone who’s just passing by can get the idea that whatever’s going on there isn’t good. Their dark and sterile existence is even more reason for you to be there ... for those who feel they have no other “choice” than to walk inside.
Chicago, Illinois

A vigil participant in Chicago sent in a picture of the abortion facility there, along with a note: “If you were a woman going for ‘women’s healthcare,’ would you go into a place with ugly gray plastic sheets hanging on a cyclone fence?”
The sheet-covered fence surrounds the parking lot next to the building. “It’s very scary and very, very sketchy looking,” said the volunteer. Victor, the 40 Days for Life coordinator in Chicago, sent word that several babies have already been saved from abortion during this campaign. “Thank you for all that you do to build a culture of life,” he said.
Austin, Texas 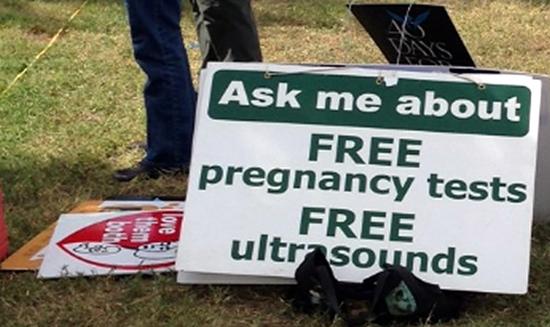 Just a few days ago, an abortion worker came out to tell the prayer volunteers they had to remove their signs from the sidewalk. Heather, the 40 Days for Life leader in Austin, thinks it’s one sign in particular they don’t like: “Ask me about free pregnancy tests and free ultrasounds." The volunteers were ready for such a ridiculous claim, so they produced a letter signed by the police chief, stating that signs could legally be used at the vigil. The abortion worker said that didn’t matter, because “the state is overriding the city on this one.” That, of course, wasn’t accurate. “This tells me two things,” Heather said. “One, the abortion facility is obviously behind this; how would the worker know about this supposed new sign ordinance otherwise? And two, our signs must be turning away a ton of business at the abortion facility for them to go this far!” She added that their attorney friends are keeping on top of this so the volunteers’ rights are protected.
Atlantic City, New Jersey

The 40 Days for Life vigil is held outside an abortion center on a busy highway just outside Atlantic City. “We are reaching thousands of cars a day,” said Ethel, the local leader, “which is probably the best free advertising ever … we get so much positive response.” 40 Days for Life is gathering momentum in the Atlantic City area, as more churches get involved. “Our church has amazed me,” she said, “with 8 to 10 people just from my church out there. My pastor at New Life Assembly said it’s about time we are joining the ranks!” As the growth continues, Ethel said she knows in time there will be even more “of the Light of God to expose the darkness.” Here's today's devotional from Rev. Ben Sheldon, President Emeritus of Presbyterians Pro-life
Day 28 intention We pray for the conversion of abortionists and all abortion advocates.
Scripture “Wash yourselves, make yourselves clean; Put away the evil of your doings from before My eyes. Cease to do evil, Learn to do good; Seek justice, Rebuke the oppressor; Defend the fatherless, Plead for the widow.” — Isaiah 1:16-17
Reflection God is just. Inscribed around the inside of the Jefferson Memorial in Washington, DC, are the immortal words of Thomas Jefferson: “I tremble for my country when I reflect that God is just.” If the deist, Jefferson, knew in the depths of his being that God is just, how much more ought we Christians to reflect on this profound truth? The justice of God, like his holiness and his purity, encourages us to seek justice for all people. It is the evil deeds and wrong, selfish attitudes of our modern society that have led to the cavalier acceptance of abortion and euthanasia. But, as Jefferson also said, “his justice will not sleep forever.” God is calling us today to seek justice, to encourage the oppressed, and to defend the orphans and widows of our society. It is a noble calling! It is one which every true believer, every God-fearing man and woman, should heed with no hesitation and no reluctance. To follow the God of justice and truth is to stand unequivocally for the right to life of everyone, especially the unborn, the physically disabled, and the terminally ill. God's word through the prophet Isaiah is as relevant in today's 21st century world as it was in Isaiah’s 8th century BC world. May God's grace help us to defend the unborn’s right to life as well as that of the already born.
Prayer O God, our heavenly Father, give us courage and wisdom as we seek to eradicate the evil in our society. Help us to realize that your divine Spirit alone can change hearts and minds so that all your human creatures may enjoy the fullness of life you intended for them. I pray this prayer in the name of Jesus Christ, my Lord and Savior, Amen.
Printable devotional To download today’s devotional as a formatted, printable PDF to share with friends: http://40daysforlife.com/media/fall2014day28print.pdf
For Life,
Posted by Deacon John at 12:33 PM