Dear Deacon John,
Recently I visited a few 40 Days for Life campaigns that really show how God uses the simple things to make a difference — and sometimes all it takes is for you to just show up! The mere sight of a person standing in silent prayer can speak volumes to a young woman who has been told that abortion will solve her problems. When they see that someone is praying – for them and their babies – it can make all the difference in the world. Most of the time, we don’t see that difference right away. But other times, it can become clear a week, month or even a year later ... like I found out during my stop in Indianapolis.
Indianapolis, Indiana 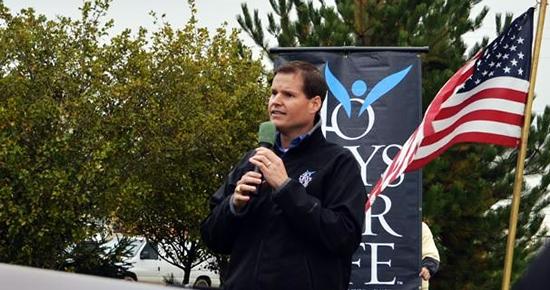 It was cold and rainy, but still it was an enthusiastic campaign in Indianapolis in front of a Planned Parenthood facility where an estimated half of Indiana’s abortions are done. While I was speaking to the crowd, a woman drove up. She had seen a large number of people out praying and said, “I need to share something with you.” The woman then thanked volunteers for being out at the vigil. She said that she was on her way to have an abortion at that Planned Parenthood last year during the 40 Days for Life campaign … but couldn’t go through with it after seeing volunteers praying at the abortion center.
She said she drove on by, never went back, and now has a beautiful son who was sitting in the back seat of her car. 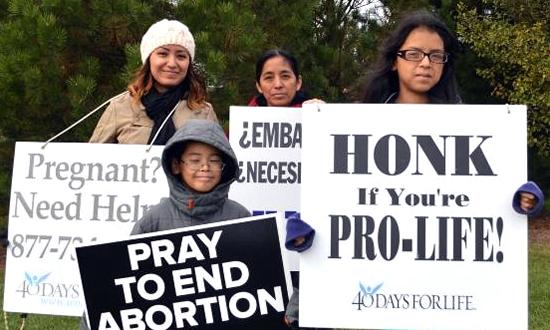 Linda, who is helping lead the 40 Days for Life campaign, was so excited to see how God used their presence last year without them knowing until recently exactly how He was doing that. Stories like this remind us that the cold and the rain are worth enduring when there are lives at stake. Praise God for this mom’s courage … and her willingness to share her story with those who were out praying for her.
Robbinsdale, Minnesota 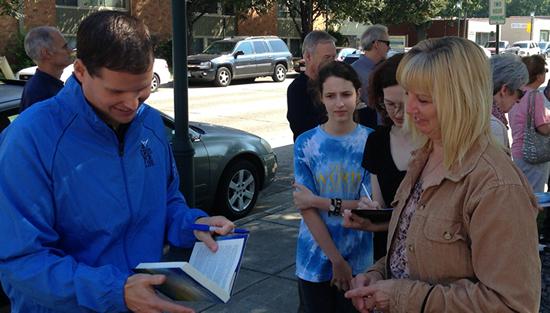 Steve Karlen, our North American outreach director, and I had a chance to visit with the 40 Days for Life team in Robbinsdale. It’s the first campaign there. Here’s a quick story about how their presence on the sidewalk is already making a difference. A young woman walked up to a couple of vigil participants who were praying and holding signs. She said she was there for an abortion … but the volunteers sensed she really didn’t want to go through with it. The counselors talked to her about the positive choices she could make – and noted there was a pregnancy help center right across the street from the abortion facility. As they walked with her to the pregnancy center, they learned more about her. She’s a single mother with other children … and the baby’s father is not around to help. She said the main reason she was drawn to abortion is her financial situation – she said she couldn’t afford to raise another child. She kept asking about adoption. Please keep this young mom in your prayers! Here’s today's devotional from Rev. J. Kirk van der Swaagh of the Conservative Congregational Christian Conference.
Day 25 intention We pray for the conversion of all those who refuse to acknowledge that human life belongs only to God.
Scripture Then the word of the Lord came to me, saying: “Before I formed you in the womb I knew you; Before you were born I sanctified you; I ordained you a prophet to the nations.” — Jeremiah 1:4-5
Reflection To be or not to be? There is no question! The question of “being” is something philosophers have long pondered. What is the meaning of being and what is the source? In the passage before us, we have our answer. We have being because we are known by God. For God to declare that he knows and sets apart the prophet Jeremiah even before he is conceived indicates that our being rests in God’s own being. Because He is and because He wills we, therefore, are and do. The Apostle Paul says as much when he declares before the philosophers of his day, “In Him we live and move and have our being” (Acts 17:28). One of the tragedies of the abortion culture is that life in the womb has been so heartbreakingly devalued. To embrace the arguments of the “pro-choice” crowd one must conclude that the child in the womb doesn't exist, isn't there, has no being. But nothing could be further from the truth. That child is known by God and, as such, has being.
Prayer Lord God, we confess that in You we live and move and have our being. Because You are, we are. May we find grace from You to affirm the being of every human and may we labor to make this truth known to the world around us. Amen.
Printable devotional To download today’s devotional as a formatted, printable PDF to share with friends: http://40daysforlife.com/media/fall2014day25print.pdf
For Life,