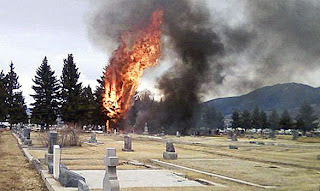 MEDIA ADVISORY, Mar. 24 /Christian Newswire/ -- Some of you may have seen the major news story of the private plane that crashed into a Montana cemetery, killing 7 children and 7 adults.

But what the news sources fail to mention is that the Catholic Holy Cross Cemetery owned by Resurrection Cemetery Association in Butte - contains a memorial for local residents to pray the rosary, at the 'Tomb of the Unborn'. This memorial, located a short distance west of the church, was erected as a dedication to all babies who have died because of abortion.

What else is the mainstream news not telling you? The family who died in the crash near the location of the abortion victim's memorial, is the family of Irving 'Bud' Feldkamp, owner of the largest for-profit abortion chain in the nation.

Family Planning Associates was purchased four years ago by Irving Moore "Bud" Feldkamp III, owner of Allcare and Hospitality Dental Associates and CEO of Glen Helen Raceway Park in San Bernardino. The 17 California Family Planning clinics perform more abortions in the state than any other abortion provider - Planned Parenthood included - and they perform abortions through the first five months of pregnancy.

Although Feldkamp is not an abortionist, he reaps profits of blood money from the tens of thousands of babies that are killed through abortions performed every year at the clinics he owns. His business in the abortion industry was what enabled him to afford the private plane that was carrying his family to their week- long vacation at The Yellowstone Club, a millionaires- only ski resort.

The plane went down on Sunday, killing two of Feldkamp's daughters, two sons-in-law and five grandchildren along with the pilot and four family friends. The plane, a single-engine turboprop flown by Bud Summerfield of Highland, crashed into the Catholic cemetery and burst into flames, only 500 ft. from its landing destination. All aboard were killed.

The cause of the crash is a mystery. The pilot, who was a former military flier who logged over 2,000 miles, gave no indication to air traffic controllers that the aircraft was experiencing difficulty when he asked to divert to an airport in Butte. Witnesses report that the plane suddenly nosedived toward the ground with no apparent signs of a struggle. There was neither a cockpit voice recorder nor a flight data recorder onboard, and no radar clues into the planes final moments because the Butte airport is not equipped with a radar facility. Some speculate that the crash was due to ice on the wings, but this particular plane model has been tested for icy weather and experts have stated that ice being the cause is unlikely.

In my time working for Survivors of the Abortion Holocaust, I helped organize and conduct a weekly campaign where youth activists stood outside of Feldkamp's mini-mansion in Redlands holding fetal development signs and raising community awareness regarding Feldkamp's dealings in child murder for profit. Every Thursday afternoon we called upon Bud and his wife Pam to repent, seek God's blessing and separate themselves from the practice of child killing.

We warned him, for his children's sake, to wash his hands of the innocent blood he assisted in spilling because, as Scripture warns, if "you did not hate bloodshed, bloodshed will pursue you". (Ezekiel 35:6)

A news source states that Bud Feldkamp visited the site of the crash with his wife and their two surviving children on Monday. As they stood near the twisted and charred debris talking with investigators, light snow fell on the tarps that covered the remains of their children.

I don't want to turn this tragic event into some creepy spiritual 'I told you so' moment, but I think of the time spent outside of Feldkamp's - Pam Feldkamp laughing at the fetal development signs, Bud Feldkamp trying not to make eye contact as he got into his car with a small child in tow - and I think of the haunting words, 'Think of your children.' I wonder if those words were haunting Feldkamp as well as he stood in the snow among the remains of loved ones, just feet from the 'Tomb of the Unborn'?

I only hope and pray that in the face of this tragedy, Feldkamp recognizes his need for repentance and reformation. I pray that God will use this unfortunate catastrophe to soften the hearts of Bud and Pam and that they will draw close to the Lord and wash their hands of the blood of thousands of innocent children, each as precious and irreplaceable as their own.

Gingi Edmonds is a freelance pro-life activist, writer and photographer based out of Hanford, California. Gingi writes a bi-monthly ProLife Opinion Column and is available for pro-life presentations and speaking engagements. Visit www.gingiedmonds.com for more information.