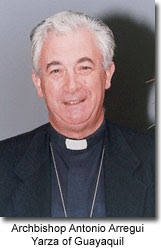 Quito (Agenzia Fides) - "With great joy we received the news of the 'Cardinal Von Galen' Award to be presented to Archbishop Antonio Arregui of Guayaquil, President of the Ecuadorian Bishops' Conference, for his untiring dedication to the defense of human life." This is what was written in the statement published this weekend by the Pro-Life Action Committee of Ecuador, affiliate of Human Life International, in announcing the presentation of the award to the Archbishop for his outstanding defense of human rights and the position of the Catholic Church in defense of life.
"Human Life International and its Spanish counterpart are proud to present this special award to a leader of the Catholic Church in Ecuador, a courageous and charismatic citizen who has been valiant in defending the lives of the poorest and most defenseless of the world, the unborn children," the text continued. The award will be officially presented to Archbishop Antonio Arregui this coming April in Quito. The "Cardinal Von Galen" Award acknowledges an untiring effort in defense of human rights and life. Clemens August von Galen (1878-1946), as Bishop of Münster (Germany), during the Nazi era, raised his voice in defense of the poor and sick, protesting against euthanasia and against the persecution of the Jews and the expulsion of religious. On account of his courage, he was known as the "Lion of Münster." The motto he chose in his election as bishop was: "Neither praise nor threats will distance me from God." And he lived this out. August von Galen was courageous in facing up to the Nazis, in unveiling the truth about the ideology of Nazism, defending the freedom of the Church and Catholic associations, as well as religious education. He openly accused the Nazi regime of discriminating against Christians, imprisoning them, and killing them. He condemned other abuses of the government, fought for the right to life, and vehemently denounced the slaughter of physically and mentally handicapped who were considered "useless."