FROM CALIFORNIA CATHOLIC DAILY: News From The Trenches 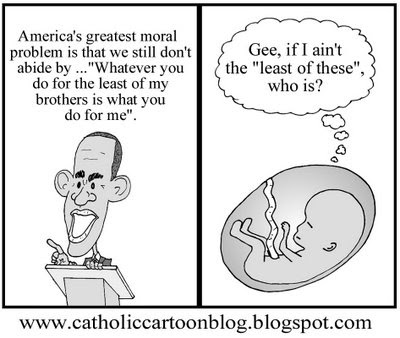 Blessed with the prayers of six public prayer warriors, Our Lady of Guadalupe, and countless others praying wherever you were, there were three miraculous saves at FPA today! Thankfully, we were able to pass out fliers to nearly every woman coming to the mill as well as to the people dropping them off or exiting.

It was another very slow day at FPA, with approximately ten women entering the mill.

Midway through the prayer vigil, David spoke with a couple from Mexico in the driveway. He told them all about the doctor at FPA and strongly suggested they go to Dr. George Delgado at Culture of Life Family Services instead. He assured them that they didn’t have to make a decision right away and that it would be very good to think about it over the weekend and then go see Dr. Delgado on Monday. They were a very nice couple and were receptive to everything he said, and thanked him for the information. They then parked near the mill and stayed there for about fifteen minutes or so. We continued to pray hard for them.

As we were still praying for that couple, David had a chance to talk to two women as they drove into the driveway. At first, the lady driving wouldn’t take the pamphlet about the abortionist. So he just explained the doctor’s record to them and they listened with some apprehension, which is often a good sign the message is having an impact. The lady driving asked him where he got this information and then accepted the pamphlet. They drove around through the parking lot and left without even going inside the mill!

As we saw them leave, I noticed the other couple had left too!

All glory to God and thanks to the Blessed Mother for these turnarounds! Please continue to pray for these two couples.

About ten minutes later, they came out of the clinic and walked right by me. Though they didn't immediately want to talk, they did stop when I asked the young girl about the rosary she was wearing around her neck. Asking her if it was something she considered jewelry, or did she ever pray it, she responded she did not know how to pray it. After telling her a little about the rosary, I asked how old she was, guessing eighteen or so. They all began to laugh nervously, which led me to believe she was much younger. Looking right into the eyes of the young woman I felt had gone in for the abortion I said, "I know you think an abortion will be the solution to all your problems, but it is really the beginning of many sorrows for you,” and then began to tell her about all the help available for her, pointing to all the pregnancy centers listed on the back of the pink flier entitled "Before you Choose."

She began to tear it up and the young man asked if he could have a copy of the flier and then asked if all the places I had pointed out provided free pregnancy tests, etc. After I told him they did, I informed him about Culture of Life Family Services and what services they provided. After expressing gratitude, they began to walk down the sidewalk looking for a Burger King.

A bicyclist stopped to ask why we are always praying here. After informing him of the abortion mill, as well as the medical board record of the abortionist, he asked me for a copy of the flier and said he was sickened and shocked by this and would pray that "the place closes" every time he passed the mill.

Just before we began to leave, the guard approached and told us we were not allowed to put holy water on the ground. The fact that he called it "holy" water led me to ask him, "How do you know this is holy water?" He smirked and said, "I just know." As evidenced by the supernatural grace of this sacramental, we continued to bless the ground with our holy water.

Please pray for the three young women who turned away from FPA that they continue to choose life for their unborn babies, as well as for the conversion of all those who had an abortion.

Thank you to all who came out to FPA today to give public prayer support and to those, unable to be physically present, prayed wherever you were. Your prayers saved the lives of three of God's Precious Infants!

In Christ thru Mary,