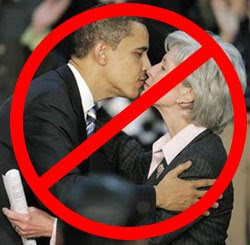 Gov. Kathleen Sebelius is set to be confirmed by the U.S. Senate this week as Secretary of Health and Human Services. Please join me in calling on our senators to stop this enemy of the preborn.

Please take a moment to call your senators and ask them to reject the nomination of Gov. Kathleen Sebelius to Health and Human Services Secretary. Please call the Senate switchboard at (202) 224-3121.

I know you and I share a feeling of horror at the thought of this rabidly pro-abortion governor in charge of the nation’s healthcare.

Gov. Sebelius has been not only a supporter of abortion access – she has actively promoted the culture of death in Kansas. Sebelius is so wedded to the pro-abortion agenda she hosted the notorious late-term killer Dr. George Tiller at the Kansas governor’s mansion.

Thanks to you and your participation in the STOP Sebelius campaign, the nation has taken notice of the surge of opposition to Sebelius’ appointment as Health and Human Services Secretary.

But the fight’s not over yet. Gov. Sebelius’ Senate confirmation hearing could come as early as this week.

The Senate’s decision this week will be the deciding factor. Please help us inundate the Senate offices with our voice of outrage.

Sincerely yours in the Lord who IS Life,

P.S. Below is a letter to the editor I sent to The Washington Times today. It is a response to a report on the Catholic Church’s reaction to the Sebelius’ nomination and the continued call to enforce Canon 915 and not allow pro-abortion politicians access to the Holy Eucharist.

Julia Duin ("Sebelius in trouble with Catholic Church," March 24) has inadvertently tossed confusion into what is already a very sad situation. Duin reports that a spokesperson for Archbishop Wuerl told her “the admonition [denial of Communion] does not prohibit priests from serving Mrs. Sebelius if she does present herself…”

This is incorrect. The subject of the “admonition” is Catholic Church law, Canon 915 to be specific. This is a law of the Church and is not a matter of debate or opinion, regardless of what many priests and bishops may suggest. When a Catholic public figure unapologetically supports abortion, that Catholic is in violation of the Code of Canon Law. Canon 915 makes clear that those who “obstinately persist in manifest grave sin are not to be admitted to Communion.”

This means that no ordained priest, deacon or Extraordinary Minister of Holy Communion should give the sacrament to Sebelius.

Further, during Pope Benedict XVI’s visit to the United States, many pro-abortion Catholic politicians snuck around to priests at the rear of the public Masses and received the sacrament of Communion even though they are painfully aware of their sinful action in doing so.

Finally please note that Joseph Cardinal Ratzinger, now Pope Benedict XVI, advised the American Catholic Bishops five years ago, in 2004, in his memo “Worthiness to Receive Holy Communion,”
5. Regarding the grave sin of abortion or euthanasia, when a person’s formal cooperation becomes manifest (understood, in the case of a Catholic politician, as his consistently campaigning and voting for permissive abortion and euthanasia laws), his Pastor should meet with him, instructing him about the Church’s teaching, informing him that he is not to present himself for Holy Communion until he brings to an end the objective situation of sin, and warning him that he will otherwise be denied the Eucharist.

6. When “these precautionary measures have not had their effect or in which they were not possible,” and the person in question, with obstinate persistence, still presents himself to receive the Holy Eucharist, “the minister of Holy Communion must refuse to distribute it” (cf. Pontifical Council for Legislative Texts Declaration “Holy Communion and Divorced, Civilly Remarried Catholics” [2002], nos. 3-4). This decision, properly speaking, is not a sanction or a penalty. Nor is the minister of Holy Communion passing judgment on the person’s subjective guilt, but rather is reacting to the person’s public unworthiness to receive Holy Communion due to an objective situation of sin."
Judie Brown
President, American Life League, Inc.