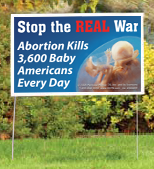 'Please Gentlemen - for the Love of God, and the Love of Human Life - Filibuster Kagan; and Leave the Results in the Hands of God.'

Protests on Monday, June 28; details below

What: Protests Regarding Elena Kagan, and the Duplicity of Senators Graham, McConnell, and Kyl.

On Monday, June 28, Pro-lifers from the Washington DC area and beyond will gather at the Dirksen Senate Office Building to draw attention to the cowardice and treachery of Senate Republicans, especially Senate Minority Leader Mitch McConnell, SC Senator Lindsey Graham, and Arizona Sen. Jon Kyl regarding the nomination of a Lena Kagan to the Supreme Court of the United States of America.

They will have a public demonstration from 8 AM. to 12:00 noon, coinciding with the opening of the Judiciary hearings for Kagan's nomination.

Senators McConnell, Graham, and Kyl, have all in turn discussed filibustering Obama Supreme Court picks, but then backed away when it was time to act.

"These men have used unborn babies as political pawns. They say they are pro-life - and talk a good game on the talk show circuit or in campaigns - but they refuse to fight for the babies when it really matters. They put the 'T' in treachery."

"Senator Kyl is a case study in trash-talking and duplicity. Obviously, the record is clear that Elena Kagan will uphold Roe. If Senator Kyl does not have the courage and moral compass to filibuster someone who promotes the wholesale slaughter of the unborn, then he is worse than useless as a 'pro-life senator;' he is a collaborator with the other side.

"Please gentlemen - for the love of God, and the love of human life - filibuster Kagan; and leave the results in the hands of God. If the lives of the innocent are not worth an attempted filibuster, then nothing is."

Times and Locations for Monday, June 28.