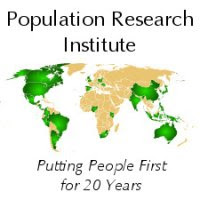 FRONT ROYAL, Va., June 18 /Christian Newswire/ -- The Population Research Institute (PRI) today responded to a report by the Government Accountability Office (GAO) that the federal government provided almost one billion dollars to abortion groups over the past eight years by calling for a complete ban on such funding.

The GAO reported that $967.1 million dollars of taxpayer funds have gone to groups that perform or promote abortion from 2002-2009, with one-third of that money coming from Title X alone. The groups funded include Advocates for Youth, the Guttmacher Institute, International Planned Parenthood Federation (IPPF), the Population Council of the United States, and Sexuality Information and Education Council of the United States--all hard-line abortion promoters/providers. According to the report, a hefty $342.1 million in Title X funds went straight to Planned Parenthood and its affiliates.

Even though current law technically "separates" funds provided by Title X from funds that go toward abortions, this is nothing more than a bookkeeping gimmick.

"Banning all funding to abortion groups would be sound policy," said Steven Mosher, president of PRI. "Investigations have shown that such groups engage in racial profiling by targeting minorities, that they rely upon deception and even coercion to boost their business, and that they deny young women the information they need about fetal development to give their informed consent."

"There is no reason why any U.S. organization--most especially the biggest abortion provider of them all, Planned Parenthood, should be receiving taxpayer dollars," Mosher continued. "There are legitimate health needs that these funds should be expended upon--expenditures that the American taxpayer can wholeheartedly agree on. Funding for abortion is not one of those."

An effort is underway in the House of Representatives to ban all groups that perform abortions from receiving Title X funding. The "Title X Abortion Provider Prohibition Act," introduced January 21, 2009 by Representative Mike Pence (R-IN), currently has 93 co-sponsors. It would "amend title X . . . to prohibit family planning grants from being awarded to any entity that performs abortions, and for other purposes."

"A substantial majority of the American electorate opposes federal funding of abortion," said Mosher. "This legislation would ensure that their wishes are respected."