Over 800 Rabbis Urge Filibuster to Prevent Homosexualization of the Military 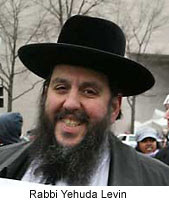 MEDIA ADVISORY, June 16 /Christian Newswire/ -- In the wake of the recent Congressional votes to repeal the ban on homosexuals serving openly in the US Armed Forces, Rabbi Yehuda Levin, Official Spokesman on family issues for the Rabbinical Alliance of America, representing the views of approximately 850 Orthodox Rabbis across the US and Canada, issued the following statement - ahead of the expected full Senate vote:

"Decent Bible-believing family people have been increasingly outraged by the cravenness of many politicians in their mad dash to turn timeless values on their heads, by advancing homosexual adoption, domestic partnerships, civil unions, 'marriage,' and 'Heather Has Two Mommies,' et. al.

"The next slice of the salami - the koshering of volitional homosexual activity, along with all aspects of the homosexual culture, throughout the US Military -- constitutes a rebellion against G-d, and demoralizes both military and civilian society. We condemn the inherent antipathy, intolerance, and even belligerence towards the essential religious liberties of Bible-adherents.

"How queer that Politically Correct 'equality' -- fanatics in the military, who have already recognized the 'religious rights' of Wiccans, would single out traditional Bible-believers to be the object of their Zero-Tolerance policies. This will render it nigh impossible for Bible adherents to serve in the military.

"Passage of such evil legislation would expedite our hurdling towards Sodom and Gommorah. It would also threaten to repel Divine Grace from our military's struggles, and beyond. We call upon the Senate to unapologetically filibuster this legislation. We also ask all people of faith to adhere to our previous declaration that it is forbidden to vote for office-seekers who support the homosexual agenda.

"We wish to express our deep anguish, and apologize to the American people for the role Senators Lieberman and Levin have played in advancing this 'abominable' legislation. WE CONDEMN THEM. ENOUGH IS ENOUGH."