The US Attorney failed to appear and file formal charges against Rev. Mahoney 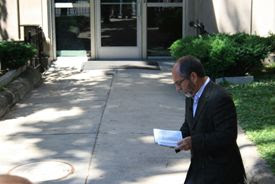 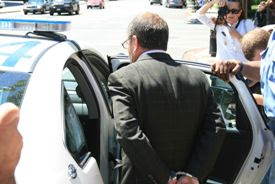 Government Refuses to File Charges Against Christian Leader Who was Arrested for Praying on a Public Sidewalk in Washington, D.C.

WASHINGTON, June 30 /Christian Newswire/ -- During the arrangement of Rev. Patrick Mahoney in Washington, D.C., the US Attorney failed to appear and file formal charges against Rev. Mahoney for his June 8 arrest on a public sidewalk in front of a Planned Parenthood in Washington, D.C.

This action by the Department of Justice indicates that Rev. Mahoney was clearly praying on a public sidewalk and his actions did not violate the law.

These actions also demonstrate that the City of Washington, D.C. erred in arresting Rev. Mahoney for simply expressing his First Amendment rights in the public square and that Planned Parenthood is misleading pro-life activists by saying the sidewalk in front of their clinic is "private."

The Christian Defense Coalition plans a major event at Planned Parenthood, Washington, D.C. August 13-14 in which people will join in prayer on the public sidewalk where Rev. Mahoney was arrested.

"It was a disgrace and an outrage that the City of Washington, D.C. arrested me for praying on a public sidewalk in front of Planned Parenthood. It was clear that I did not violate the law for simply celebrating my free speech and First Amendment rights in the public square.

"The US Attorney did not file formal charges because they recognized this also. They knew it would be laughable to try to prosecute a minister for praying on the public sidewalk. We now call upon the City of Washington, D.C. to stop intimidating and harassing peaceful citizens who simply want to publicly pray and counsel.

"On August 13-14, we will be calling people to come join the Christian Defense Coalition and pray with us on the sidewalk at Planned Parenthood. Our prayer and hope is that our nation's capital will choose to celebrate free speech and not crush it."