Dear Deacon John,
The heroes of 40 Days for Life campaigns are the local leaders ... because leading a campaign is hard – really hard. From recruiting volunteers to pray at an abortion center ... to working with local police ... to dealing with hostile media ... leading a campaign is a challenge. It takes a special person to do it. Many of our local leaders don’t see praying and working to end abortion as something they have to do ... but something they get to do. It would be easy and cynical to say that abortion is here to stay – to believe that we really are helpless in the fight for life. But 40 Days for Life leaders don’t see it that way. They pray and they trust God ... and their example should inspire you as we enter the second half of the campaign. Leaders range from college students to retired military officers to stay-at-home moms ... and they’re a force to be reckoned with. We love them all. Today, we salute our local leaders, who make these daily email updates possible. We start with a campaign I just visited.
Haverhill, Massachusetts 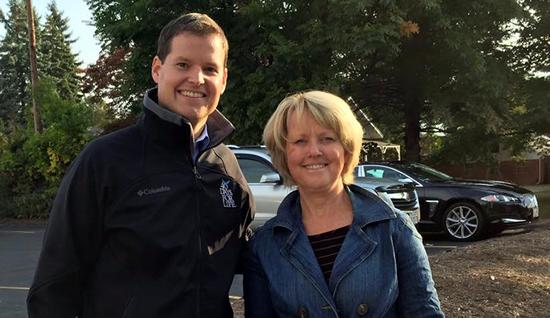 It was great to meet Debbie, the new 40 Days for Life campaign leader in Haverhill. She found herself praying alone on Day 1 ... and she immediately prayed for help with the campaign. Later in the day, that help arrived. A woman came out to the vigil and said she had just found out about 40 Days for Life and wanted to help in any way possible. “And wow! Has she backed up her words!” Debbie said. “She has been a huge help and was an answer to my prayer on Day 1!” 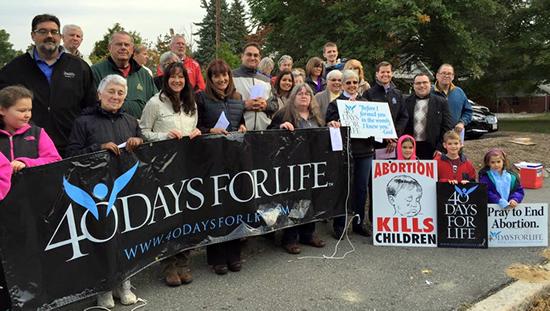 During this campaign, Debbie and her team are paying tribute to a longtime dedicated prayer warrior, John Cronin. John would pray every day at the abortion center in Haverhill during 40 Days for Life. He passed away on July 4 and Debbie wants everyone to make him proud. On the days when John felt really ill, he would still go to the vigil and remain in his car to pray. He was that dedicated and never complained. I was fortunate to meet John’s wife, who was so inspired to see people coming out in his honor.
Billings, Montana 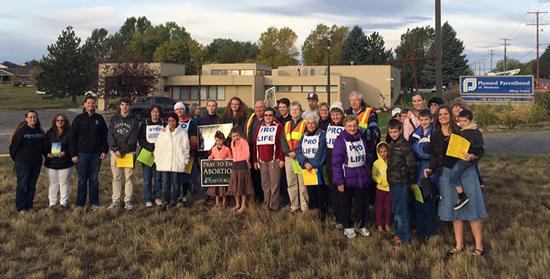 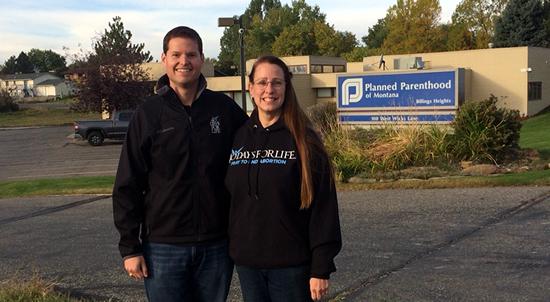 Amy is the dedicated leader in Billings, where so many come out to pray. Their first campaign was in 2009 … and many of their campaigns have been 24-hour vigils despite the cold!
Here’s today’s devotional from Carmen Pate of Alliance Ministries.
Day 21 intention Pray that we each will daily put on the full armor of God, so that we are strong in the Lord and the power of His might.
Scripture For we do not wrestle against flesh and blood, but against principalities, against powers, against the rulers of the darkness of this age, against spiritual hosts of wickedness in the heavenly places. Therefore, take up the whole armor of God, that you may be able to withstand in the evil day and having done all, to stand. — Ephesians 6:12-13
Reflection from Carmen Pate I am confounded to see how the battle over the issue of life is perceived more often in churches today as political rather than spiritual. Ironically, the enemy has used this twisted perception to silence many in the body of Christ. We must see the battle for what it is and if we are to be prepared to face the spiritual enemy on the issue of abortion, we must daily "put on" the armor God has given us: Gird your waist with Truth (vs. 14) – Commit your emotions to believe truth and to speak truth, regardless of the repercussions. Put on the breastplate of Righteousness (vs. 14) – It will protect our hearts -- the innermost springs of our beings -- from all unrighteousness so evident in this fallen world.   Shod your feet with the preparation of the Gospel of Peace. (vs. 15) – Preparation is vital if we are to be effective in God's work. Taking the shield of faith (vs. 16) – The Accuser will instill doubt, fear, and guilt. Faith acts as an invisible shield that deflects such false accusations. Taking the Helmet of salvation (vs. 17) – A helmet protects the head, the brain and in turn our mind and thoughts. Satan hopes we will set aside divine revelation for human reasoning. Taking the sword of the Spirit (vs. 17) – The Word of God, the only offensive weapon in this armor, was used by the Lord Jesus against Satan. The living Word is powerful and effective. Our armor is complete. We are ready to wage war, and the next verse tells us how, "Praying always with all prayer and supplication in the spirit." (vs. 18)
Prayer Dear Lord, as you lead us into the spiritual battle of abortion may we be reminded that the battle is truly Yours. We thank you for equipping us with Your armor. Lead us daily to put it on! Thank you for allowing us to serve under your command, and for hearing our requests for direction and protection. Thank you for the victory that is ours because of Your Son, Jesus, Amen.
Printable devotional To download today's devotional as a formatted, printable PDF to share with friends: http://40daysforlife.com/media/day21.pdf
For life,
Posted by Deacon John at 11:17 AM