Dear Deacon John,
The abortion business is awash in big money. Planned Parenthood took in more than $500 million of your tax money last year ... and abortion accounts for up to 86% of their affiliates’ clinic income. Planned Parenthood (and some other abortion centers) is technically a non-profit organization. But “non-profit” is merely a category in the tax code; it doesn’t mean that the organization isn’t concerned with cash flow – and top executives have certainly not taken a vow of poverty. Many centers demand payment in advance – cash, credit card … or in some cases, proof of insurance. No money? No pregnancy test. No ultrasound. No abortion. Someone will have to pay if you want those from Planned Parenthood. For the abortion facility, it’s the bottom line that matters. But while money may control the abortion industry ... it doesn’t control a mother’s heart. Here’s an example.
El Paso, Texas 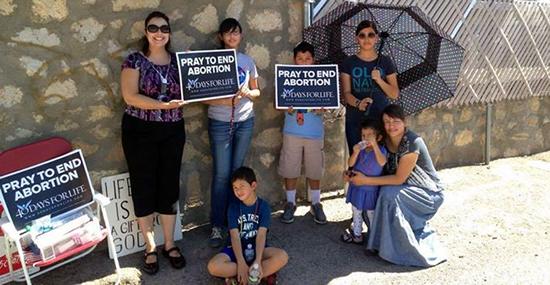 “A couple arrived at the Hilltop abortion facility to get their money back,” said Gabriela in El Paso, “because they’re keeping their baby! Praise the Lord! This woman even said she is now excited about keeping her baby.”
The El Paso team also shared the story of another woman who arrived for an abortion. But after talking to the sidewalk counselors, she decided against it. “The woman said she’ll be calling her doctor to schedule an ultrasound and start prenatal care instead,” Gabriela said.
She added that this was the first time this counselor had witnessed a mother experience a change of heart. “Her joy and excitement were immeasurable!”
Virginia Beach, Virginia 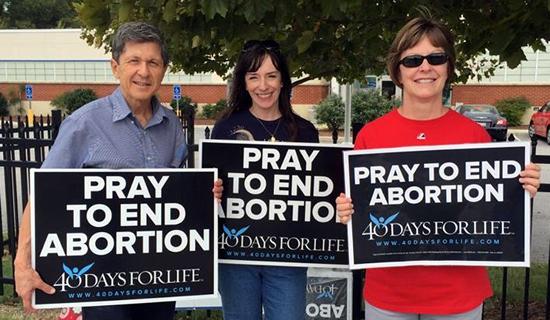 A prayer request from the 40 Days for Life team in Virginia Beach shows the level of stress faced by a woman dealing with an unexpected pregnancy.
They’ve asked for prayer for a young woman who feels completely overwhelmed by her situation. Volunteers have offered help … but she was still scheduled to return to Planned Parenthood. “Please pray that God will see her through this uncertain time.”
The Virginia Beach volunteers are also praying for a young couple, that they “will follow through on the most selfless decision to birth their baby and make another couple’s dreams come true through adoption.”
In addition, the team received affirmation that their presence and prayers really do matter. “A couple stopped by to thank us for being there,” one of the vigil participants said. “Ten years ago someone praying in front of the abortion clinic where the woman had made an appointment changed her mind and saved their beloved son.”
Here's today's devotional from Dennis DiMauro of Lutherans for Life.
Day 23 intention We pray for the strength to love those who do not love us.
Scripture But the Lord said "You have had pity on the plant for which you have not labored, nor made it grow, which came up in the night and perished in the night. And should I not pity Nineveh, that great city, in which are more than one hundred and twenty thousand persons who cannot discern between their right hand and their left, and much livestock? Should I not be concerned about that great city?" — Jonah 4:10-11
Reflection from Dennis DiMauro God doesn't value people and things like we do. Jonah loved a shade tree more than an entire city of sinful people. We love our dogs more than a terrorist. We love our cars more than a beggar on the side of the road. And sometimes, we love our money more than a child growing in a desperate teenager's womb. But God isn't like us. Genesis 1 tells us that humans were the capstone of God's creation. We were created on the sixth day after God had completed the land, the stars, the plants and the animals. Therefore, His love for us is greater than His love for a plant, an animal, or any other created thing. And the book of Jonah tells us that He loves even the most sinful people and seeks to bring them into His merciful arms. And it's a love that seeks to touch all of his created children: that desperate teenager, the baby growing in her womb, even tyrants and terrorists. So it's up to us to imitate God's merciful love by helping and praying for those who persecute us, and those who don't love us back.
Prayer Gracious God, loving our enemies seems like one of most difficult things you could ask of us. Please remind us that this is how you love and that if you ask it of us then you will give us the grace to do it. This we ask through Christ our Lord, Amen.
Printable devotional To download today's devotional as a formatted, printable PDF to share with friends: http://40daysforlife.com/media/day23.pdf
For life,
Posted by Deacon John at 2:32 PM