Dear Deacon John,
Peacefully praying in front of an abortion facility helps save lives. And just watch the response of abortion staff! Their actions will prove you’re effective. They will go to great lengths to marginalize your presence ... even installing vegetation and other forms of creative landscaping to keep prayer volunteers away from their clients. 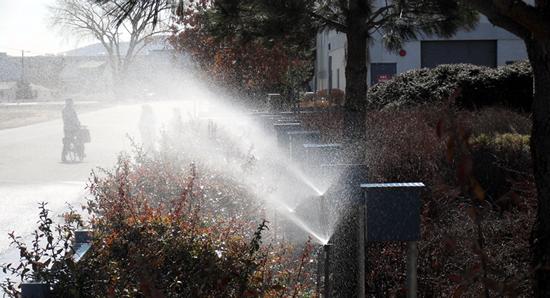 Over the years, some abortion centers have planted shrubbery. A few even put sprinkler systems next to the shrubs to give 40 Days for Life vigil participants an unexpected soaking as a form of discouragement
Some of their responses to the peaceful vigil can be aggressive or rude ... or sometimes just odd, like the facilities in the southwestern United States that lined their sidewalks with prickly cactus plants to discourage volunters.
Cactus probably doesn't grow too well in Georgia … but our North American outreach director, Steve Karlen, visited Atlanta and found yet another attempt to use vegetation as a “prayer barrier.” 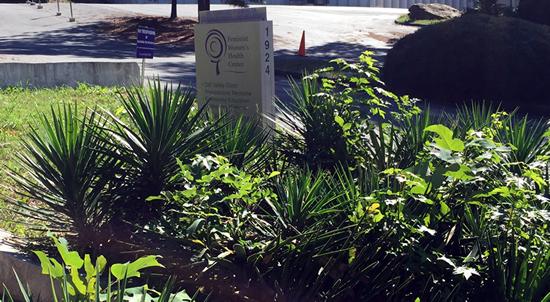 Of course … it doesn’t work. But your prayers for the abortion workers do work. No one grows up wanting to work in an abortion facility ... and many of the workers spend their days trying to justify their jobs. Sometimes that plays out in tactics like these, because they know what you too often forget – that your presence does make a difference! Here’s Steve’s report from Georgia.
Atlanta, Georgia 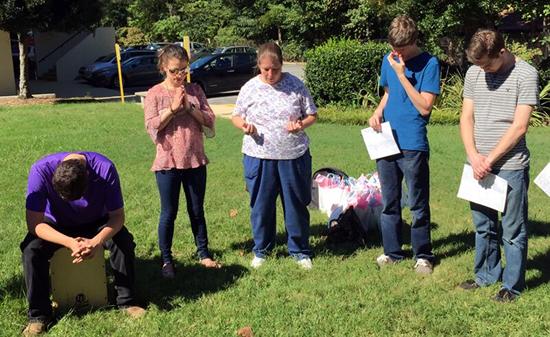 I attended two events at the vigil site in Atlanta.
The most profound story I heard here came from a woman who became pregnant through a sexual assault as a teenager. She had an abortion – and said that she healed from the assault much more quickly than from the abortion.
In fact, after the abortion, she drifted into a hard life; but eventually, she found faith and found healing … eventually marrying and raising a family.
Roswell, Georgia

The logistics of the vigil site in Roswell are challenging for the 40 Days for Life team.
Kateri, the local leader, said, “With the facility so far back from the road and its hours so limited and so many other businesses there in the office park, nobody passes us on foot to get to the facility.”
But this campaign is important because it brings attention to an abortion facility hidden in a little office park. The busy street offers an incredible public witness opportunity.
Marietta, Georgia
There are some determined volunteers in Marietta! This is the 12th 40 Days for Life campaign there ... but the first in a new location. After their last campaign, the abortion center moved out of its longtime office. A while later, the Marietta team learned that the business was going to reopen in another part of town. So they quickly began planning for their new vigil site ... praying for the mothers contemplating abortion – and letting the surrounding community know what’s going on at this new “gynecology and consulting” office in their neighborhood.
Forest Park, Georgia 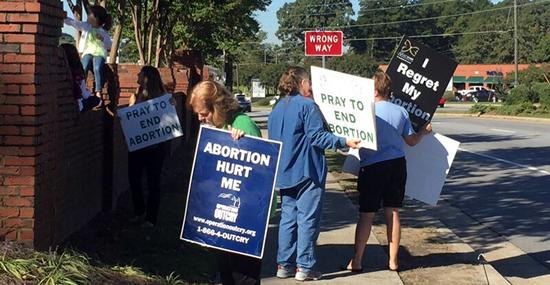 John, the local leader in Forest Park, is a real go-getter. When an abortion center opened there, he decided had to lead a campaign. They’ve had three turnarounds – not confirmed as saves yet, but they are hopeful. Some of the most active volunteers at this campaign are post-abortive women.
This campaign has not only had an impact on the vigil participants but on the surrounding community as well. While I was there, a woman who works with a business located a floor above the abortion center kept coming out to get information and fetal models. Even some city officials in Forest Park have expressed an interest in joining the campaign.
Thanks to Steve Karlen for that update from Georgia!
Here’s today’s devotional from Carmen Pate of Alliance Ministries.
Day 24 intention Pray that God will continue to bless the efforts that have gone into the 40 Days for Life campaign, as we trust Him for the results.
Scripture
Now these are Your servants and Your people, whom You have redeemed by Your great power, and by Your strong hand. O Lord, I pray, please let Your ear be attentive to the prayer of Your servant, and to the  prayer of Your servants who desire to fear Your name. — Nehemiah 1:10-11
Reflection Nehemiah provides an awesome blueprint for volunteers in God’s service, particularly those responding to the devastation abortion has caused our nation. Nehemiah grieved for God's reputation as he witnessed the condition of the city walls of Jerusalem. The walls were broken down which was seen by neighboring people as a sign of weakness on the part of Jerusalem's God. No wall meant no security for the city and its people. We learn from his story that he covered every detail in prayer; inspired others to join the cause; organized others to help do the work; confronted opposition directly and turned to God when discouraged; and finally celebrated what was accomplished and gave God all the glory! Like Nehemiah, we must acknowledge God’s sovereignty as we serve Him before a mocking world. We too need to be reminded that we are “fighting” for our families. We too must have an attitude of confession and repentance before a Holy God. We must pray for strength, refute slander, and not be diverted from our work. Like Nehemiah, we will draw attention from the enemy when we are seeking to protect the well-being of God’s people. We too must stand firm and seek God's help to persevere until the task is done. We too will be victorious.
Prayer Yours, O Lord, is the greatness, and the power, and the glory, and the victory, and the majesty: for all that is in heaven and in the earth is Yours. We pray for your continued guidance and protection throughout the remainder of this 40 day campaign. May we be steadfast, unmovable, always abounding in Your work, knowing that our labor will not be in vain. We pray in the name of Jesus, Amen.
Printable devotional To download today’s devotional as a formatted, printable PDF to share with friends: http://40daysforlife.com/media/day24.pdf
For life,
Posted by Deacon John at 11:56 AM